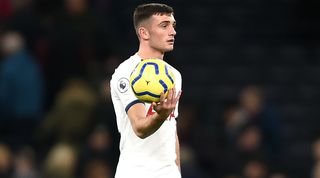 Tottenham Hotspur are reportedly blocking Troy Parrott's proposed loan move to the Championship as the market for a striker shrinks.

It's understood Parrott was told he would be on his way out on loan this month to secure him playing time.

Queens Park Rangers and Charlton Athletic were believed to be in the fold for taking the young Irishman till the end of the season.

It was initially deemed that the prodigious striker was not yet ready to compete for a place in the Spurs starting eleven.

However, according to Football Insider, Spurs have gone back on their decision and are now looking to keep Parrott at the club.

The decision comes after the north London club's search for a striker is going to go right down to the wire.

Spurs were rumoured to be chasing a number of targets but so far have made no significant headway.

To mitigate the situation, Jose Mourinho has reportedly called for the 17-year-old Parrott to be kept available for selection.

Parrott has made two appearances for Spurs so far this season and has already been capped by the Republic of Ireland national team.

The injury to club captain Harry Kane has put extra pressure on Spurs to find an added source of goals.

They completed the signing of Steven Bergwijn from PSV on Wednesday but are still desperate to sign a striker.

Recent links to former Arsenal striker Olivier Giroud have provided some optimism but with just over 24 hours remaining in the window - time is against Spurs.

Here's what you need to know about Tottenham signing Steven Bergwijn