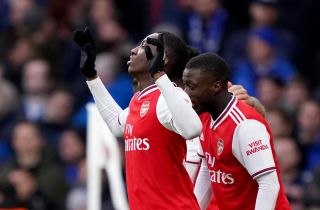 Eddie Nketiah believes his tough loan spell with Leeds helped him prepare for the battle to become Mikel Arteta’s first-choice striker at Arsenal.

The 20-year-old scored his first Premier League goal of the season in Sunday’s 3-2 victory over Everton.

After a few false dawns, including a goal just seconds into his senior debut, a lack of game time under previous head coach Unai Emery and a failed stint in the Sky Bet Championship at Leeds, Nketiah already has enough experiences to use as positives now he is in the Arsenal side.

“My Leeds experience was good for me, I learned as a player,” he said.

“I might not have played as much as I wanted, but I had good moments when I was there when I came on and played. It’s just about learning and developing.

“It started really well, obviously I came on and if you check my minutes-to-goal ratio, it’s quite good but obviously it’s just how things are.

“Sometimes the manager makes his decision and you have to deal with it. It’s about learning from that environment. It’s a very good environment to be in, he (Marcelo Bielsa) is a very demanding coach and I learned a lot.”

The England Under-21 international started just two Championship games during his spell at Elland Road.

Arsenal recalled Nketiah in January, initially with the idea of loaning him out to another second-tier club where he would get more minutes on the pitch.

A move to Bristol City was reportedly close before new boss Arteta opted to keep him at the Emirates Stadium having been impressed with his displays in training.

“Obviously I just trained well and played my usual game, I try to give my all in training and treat it as a game.

“He likes this mentality and obviously the quality I have, I try to showcase that. It’s just about working hard, I’m grateful he’s given me the opportunity he has and I just want to keep learning.

“He’s a great manager and has a real determination to help and improve players, young players and the senior players as well. I just want to keep learning of him, make sure my mentality is right each day and keep improving.

“I’m grateful to be here at Arsenal, my home club, and the manager has shown a lot of faith in me.

“Mikel thought it was best for me to stay and I agreed. It has worked out well for me now. I’m competing and fighting for a place. That’s what I’m going to continue doing for the rest of the season.”

While Everton, who shocked Arsenal by going ahead with just 49 seconds on the clock, eventually left north London empty-handed, there was positive news on the day for the Toffees.

Just over three months after a serious ankle injury, Andre Gomes made his return from the bench, playing the final half an hour.

The midfielder is pleased to be back and is now focused on helping Carlo Ancelotti’s side achieve their ambitions this season.

🔵 I would prefer to write after a win, but just need to say it loud… THANK YOU to everyone who showed me love in those 4 tough months, specially to you Evertonians. You gave me extra energy to push myself to the limit and come back stronger 💙 @Evertonpic.twitter.com/2IgRDpGLeU— André Gomes (@aftgomes) February 23, 2020

“I think we did a good game but we conceded a few chances for Arsenal,” he told Everton’s official website.

“We need to look forward and for the next games. We have three tough games coming next and we want to be ready.

“We had a lot of chances, especially in the last 20 minutes.

“I am so glad to be back in the team, to help everybody to reach what we want. We have big goals.

“The feeling is really good. It is not the result I wanted on my comeback. But I am happy to be back and to help the team.”