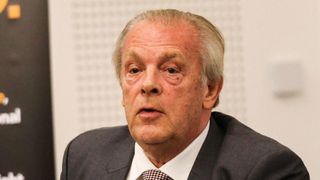 PFA chief executive Gordon Taylor has announced the union will be recommending a full and open review into its structure and operation amid calls for him to step down.

Taylor, who has served as chief executive for 37 years, has come under fire in recent times, with more than 200 current and former players calling for his departure in an open letter.

The usage of the PFA's finances has been heavily criticised while the disparity between Taylor's reported salary and the money spent on areas such as research into brain injuries has also been scrutinised.

Responding to the pressure on him in an open letter to PFA members on Wednesday, Taylor wrote: "We have listened to what has been said about us and taken the time to think carefully about what is in the best interests of our organisation and our members.

"I have dedicated the last forty years of my life to professional football. I am extremely proud of the work we do, supporting our members, whether that's through training and coaching programmes, or promoting diversity and equality in the sport.

"I am happy to defend our record – including on issues such as mental health, diversity and player welfare – but I am the first to admit that there are always areas we can improve.

"We owe it to you, our members, to hold ourselves to the highest possible standards. We believe we do. However, I am adamant that criticism must not be swept under the carpet and instead addressed head on.

"It is important that we are transparent, committed to constantly improving and restless in our mission to support you.

"We will, therefore, be recommending to the PFA's Board of Trustees and Management Committee that an independent QC conducts a full and open review into the structure and operation of the PFA as the trade union for professional footballers in England and Wales.

"We will work closely with both the Board of Trustees and Management Committee to finalise the parameters and timeline of the review, at which point we will update you.

"We are proud of the work that we do with professional players across all leagues. As you know, we are focused on working with you on some of the most pressing issues in our sport."