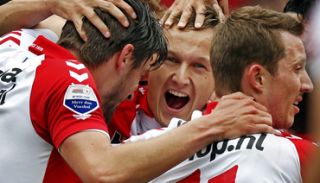 Utrecht, who finished fifth in the standings, grabbed an early lead when Van der Gun was left unmarked in front of goal to score after nine minutes.

Twente, who were comfortable league leaders earlier in the season but fell away to finish sixth, began to dominate but lacked creativity against a well-organised Utrecht side.

A blunder by Twente goalkeeper Sander Boschker, who missed the ball outside the area, allowed Duplan to double Utrecht's lead by tapping the ball into an empty net.

Utrecht's Nana Asare was sent off for a second booking in added time and will miss the return leg on Sunday.

"All our practice on set pieces paid off with the first goal and from then on we played compact and showed how dangerous we are on the counter attack," added Wuijtens, who is suspended for the second leg.

In the first legs of the relegation play-off finals, Go Ahead Eagles Deventer beat Volendam 3-0 while Sparta Rotterdam drew 0-0 with Roda JC Kerkrade.