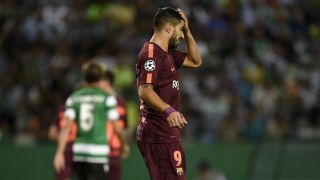 Ernesto Valverde has no concerns over the form of Luis Suarez, despite the Barcelona striker struggling for goals in the early stages of the season.

Suarez has scored just twice in seven appearances across all competitions this season and he again went goalless as Barca laboured to a 1-0 win at Sporting CP in the Champions League on Wednesday.

The Uruguay star, who has suffered with a niggling knee injury this term, missed a fine one-on-one chance in the first half and his struggles were even borne out as Barca scored - Suarez missing a header inside the six-yard box which left Sebastian Coates with little time to react as he bundled the ball into his own goal.

With Neymar having left for Paris Saint-Germain and his replacement Ousmane Dembele out for up to four months, Valverde's attacking options are shallower than usual.

But the coach has faith in his number nine, who contributed a strike to the 5-0 demolition of Espanyol last weekend.

"He scored last Sunday so I think we can leave him in peace for a while," Valverde told a news conference.

49: Cross from the right hand side bounces off Luis Suárez then defender Coates and into the back of the net! (0-1)September 27, 2017

"He didn't score today, of course we want him to score always, he is our striker, but he is a player that is always near the goal.

"He had a good opportunity but couldn't score but he is always close to scoring and he was close today for the goal we did score. But Luis scored this week and he will score again."

Barca top Group D after two wins from as many games, while they are also protecting a 100 per cent record in La Liga ahead of Las Palmas' visit to Camp Nou on Sunday.