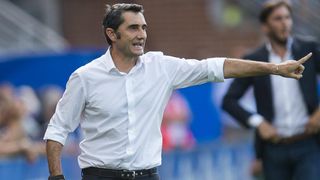 Ernesto Valverde insists Barcelona will adapt to everything – even the dishes – at Atletico Madrid's new stadium amid a debate over the length of the grass.

Ahead of Saturday's huge LaLiga clash between the two teams, Diego Simeone suggested the pitch would be prepared to Atletico's liking.

But Valverde responded in his own pre-match media conference, insisting Barca were ready for the challenge ahead of their first game at Wanda Metropolitano.

Simeone had said: "I'm not a gardener, I'm a coach, I go to the pitch and I prepare the team. But when you invite me to your house, you invite me with your tablecloth, your plates and your cups."

Addressing those comments, Valverde stated: "We will adapt to the menu, to the dishes, to everything!

"We know we are going to a place where there will be a spectacular atmosphere and we haven't played there yet."

Valverde has never beaten Simeone as a head coach, but feels he now has his best chance to end that run.

The Barca boss said: "There is no explanation. I suppose his teams have been better than the ones I have coached – until now. I will keep trying and we will see if I can do it.

"It is clear that games like this against Atletico are ones we look at ahead of time because historically they are difficult. Looking at how good they have been in the league, Champions League and Copa del Rey in the last few years it is a doubly difficult match.

"We are facing a team that is also vying for the title, which makes this game very important."

Valverde: "Atlético are tough to break down and score against. They defend as a unit and are disciplined" October 13, 2017

Valverde does not believe his players' focus will be a problem, despite many of Barca's poor results over recent seasons coming after international breaks.

"It is true a lot of players have come from playing decisive matches and the amount of tension they accumulated in this last break is important," he said.

"But Atletico Madrid also have to deal with that. If it was a game that wasn't quite as motivating for us against a different opponent, I might worry more. But we all understand how powerful they are and we are playing at their ground.

"We know we have to focus and that helps you. A game like this keeps you focused. I don't want to completely deny [Barca's record], but let's see on Saturday."