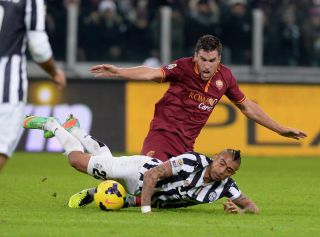 Strootman missed the back end of the 2013-14 Serie A season as well as the FIFA World Cup for Van Gaal's Netherlands side following a serious knee injury sustained during Roma's defeat to Napoli in March.

The Dutch midfielder is on the road to recovery, though a return date is yet to be set for the 24-year-old - meaning he will miss Saturday's clash with United in Denver.

Stootman's lack of fitness has not stopped talk of a move to Old Trafford and it is not the first time he has been linked with United, having caught the attention of predecessors Alex Ferguson and David Moyes before trading PSV for Roma in 2013.

And on the same day Roma coach Rudi Garcia quashed talk of Strootman's possible departure, Van Gaal admitted he would assess the player's fitness in the lead up to the January transfer window.

"I never say anything about individual players. It is my vision that we talk about a team and not individual players," Van Gaal told reporters ahead of United's opening International Champions Cup fixture at Sports Authority Field.

"Strootman I can judge, but he is injured for more than six months. We have to wait and see how he comes back.

"It is not easy to say how he comes back from injury, but we will wait and see."