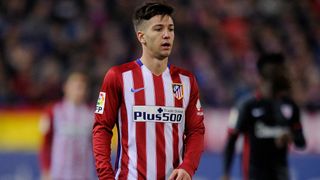 Sevilla have announced that Luciano Vietto has completed a medical and is set to seal a move from Atletico Madrid.

The 22-year-old striker has been heavily linked with both Barcelona and the Europa League holders, though Atletico president Enrique Cerezo claimed this week that the Spanish champions had not made an offer.

Vietto is now set to complete a move to the Ramon Sanchez Pizjuan and has been granted permission to train with the Sevilla first team while his transfer is finalised.

"The Argentine striker, having passed medical tests in Germany, has been given permission by Atletico Madrid to take part in training while the operation is brought to a close," Sevilla said in a statement on Friday, having confirmed his arrival at their training camp.

Vietto is expected to join on a season-long loan deal, with Sevilla likely to retain an option to make the move permanent.

The former Argentina Under-20 international joined Atleti for a reported fee of €20million last year, but scored just three goals in 28 appearances in all competitions during the 2015-16 season.