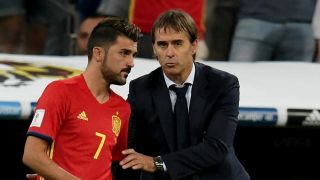 David Villa is determined to go to the World Cup as part of the Spain squad, having ended a three-year wait for an international cap in 2017.

New York City FC striker Villa had not been selected since the 2014 World Cup when Spain coach Julen Lopetegui called him up for September's double-header of qualifiers against Liechtenstein and Italy.

Injury restricted Villa to a single minute of action across the two matches, while Lopetegui has plenty of attacking options for his squad, with Chelsea forward Alvaro Morata and Atletico Madrid striker Diego Costa among them.

"I know that Lopetegui is watching me and that I'm one of the attacking candidates," Villa told Efe.

"In the end, he will decide which players are best and I'd be delighted to be part of the squad.

"What I will do is play well and train hard at the highest level to get the best out of myself."

Villa scored five goals in his last five appearances in 2017, although New York City did not make it to the MLS Cup final after they were beaten by Columbus Crew.

And the 36-year-old accepts an injury suffered during the September international break was a blow to his World Cup selection hopes.

"Injuries always seem to come at a bad time but it was even more so in that case," Villa said.

"The reaction of people was very nice though. It was a nice experience, even though it ended badly with the injury."

Former Barcelona forward Villa has made 98 appearances and has scored 59 times for his country, five of which came as Spain triumphed at the 2010 tournament in South Africa.