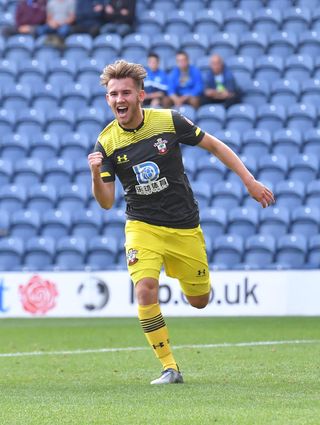 Teenage goalscorer Jake Vokins could not hide his delight after his goal helped fire Southampton to a 2-0 FA Cup third-round win over Huddersfield.

Vokins, aged 19, was only making his second senior appearance for the club when he sealed Saints’ progress in the 86th minute with a strike from the edge of the box.

Fellow teenager William Smallbone had given the hosts the lead in the 48th minute with a well-timed volley on his first senior appearance for the club.

Speaking after the match, Vokins told the club website: “It felt unbelievable to score in front of the fans on my first start for the club. I couldn’t be happier.

“I think I had an option in Michael (Obafemi), but I thought ‘I’m going to take a shot on here’, and luckily it hit the underside of the bar and went in.

“It’s joy, relief…I wanted to show what I could do and I think that I took the opportunity well with that goal. I think I stood up to the plate and showcased what I’ve got.”

Vokins and Smallbone were part of Ralph Hasenhuttl’s largely inexperienced side after he made 10 changes from the line-up which narrowly beat Tottenham 1-0 on New Year’s Day. James Ward-Prowse was the only player to feature in both matches.

Ward-Prowse wore the armband and was praised by the manager for his performance after playing five matches in 15 days.

“Always the most distance covered, he is a machine and he never tires, he also has a fantastic mind,” Hasenhuttl said of the 25-year-old.

Huddersfield manager Danny Cowley praised the FA Cup’s standing in the game but admitted his side’s focus this season is to remain in the Championship.

Cowley said: “I love the FA Cup and I think it’s the greatest cup competition in the world and it has the ability to change lives.

“Being honest where we’re at, we have to prioritise, that is true for us. The job when we came in was about trying to preserve our status in the division.

“We only had one point from eight (games), and we’re now on 28 and we’ve got to try to get to that magic 50 points and stay in the division. We’re going to work really hard to do that and if we can do that hopefully then next season we’re in a better place as a squad in a group to not only tackle the Championship, but have a good cup run as well.”