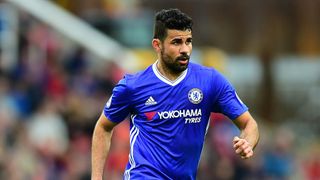 Chelsea have named Diego Costa in their Premier League squad despite the striker trying to force through a move to former club Atletico Madrid.

Costa has not reported for training at all in the new league campaign, with the relationship between the Brazil-born Spain international and Chelsea boss Antonio Conte having broken down.

The striker fell out with the Italian over a proposed move to Chinese Super League side Tianjin Quanjian in January and was subsequently left out of the squad for a top-flight game against Leicester City.

Conte successfully reintegrated Costa, who helped fire Chelsea to the Premier League title, only for the 28-year-old to effectively go on strike following the end of the season after claiming he received a text message from Conte suggesting he was no longer needed.

Costa has been vocal about his desire to return to Atletico, but with his former club under a transfer ban until January, a return to LaLiga appears to have been blocked.

Everton manager Ronald Koeman also spoke about wanting to bring the temperamental striker to Goodison Park, but the British transfer window closed on Thursday with Costa still at Chelsea.

There has been little interest shown by Conte in bringing Costa back into the fold, but his mind may be changed as Chelsea have only two senior strikers in their squad after Swansea's Fernando Llorente opted for a switch to Tottenham instead of the Blues.

The club broke their transfer record to sign Alvaro Morata from Real Madrid, but Michy Batshuayi – the player who scored Chelsea's title-clinching goal in May – is the only other forward at the club.

Costa could yet sign for Atletico on Friday as LaLiga's transfer window remains open, but he would be unable to play for Diego Simeone's side until the new year and it appears his immediate future will be at Stamford Bridge.