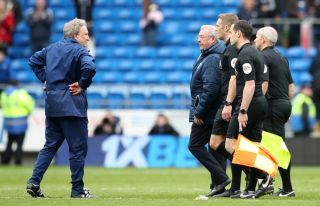 Cardiff manager Neil Warnock has been fined £20,000 after branding Premier League match officials the worst in the world.

The 70-year-old hit out furiously following his side’s 2-1 home defeat by Chelsea on March 31 after seeing Cesar Azpilicueta cancel out Victor Camarasa’s opener from an offside position with just six minutes remaining to set the stage for Ruben Loftus-Cheek to win it at the death.

He was charged by the Football Association on three counts over comments made in interviews with the BBC, Sky Sports and talkSPORT and although he denied them all, the charges were found proven by an independent regulatory commission on Wednesday.

An FA statement said: “Neil Warnock has been fined £20,000 for commenting on the match official following the Premier League game between Cardiff City and Chelsea on 31/03/2019.

“Whilst the manager denied three breaches of FA Rule E3, they were subsequently found proven during an Independent Regulatory Commission hearing today.

“In addition, comments he made in a talkSPORT radio interview on 01/04/2019 were found to constitute improper conduct and/or bring the game into disrepute.”

Warnock, whose team remain deep in relegation trouble – they are four points adrift of safety with just two games remaining – stared angrily at, but said nothing to, referee Craig Pawson and his assistants as they left the pitch.

However, he was more vocal as he spoke to the media moments later.

He told Sky Sports: “It’s almost like it’s not who you play, it’s who you get to referee and who is going to have a flag in their hand nowadays, it’s just as important.

“The best league in the world and probably the worst officials at the minute.”

Neil Warnock was still fuming when he spoke to @SportsBreakfast…https://t.co/6AssJMQBHK— talkSPORT (@talkSPORT) April 1, 2019

Warnock later told talkSPORT his wife would not have blamed him had he punched the officials.

He said: “When I came in yesterday, my wife said to me, ‘Darling if you had wanted to thump the referee and linesman, I wouldn’t have stopped you’. It was so unjust.”