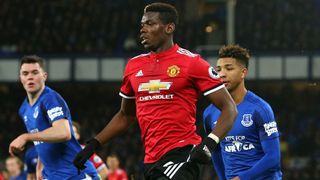 Thierry Henry was glowing in his praise for Manchester United midfielder Paul Pogba, who set up both goals in Monday's 2-0 win at Everton, also hailing the Frenchman's leadership.

Wearing the captain's armband in the absence of injured full-back Antonio Valencia, Pogba provided assists for Anthony Martial and Jesse Lingard at Goodison Park as United snapped a run of three consecutive draws in the Premier League.

Pogba starred on New Year's Day, at home on the left of a three-man midfield – where the France international established himself during his time at Italian champions Juventus before returning to United in 2016.

"He can play in a lot of positions. I said when he first arrived that, for me, he is not a holding midfielder," fellow Frenchman Henry told Sky Sports.

"He can play in a lot of positions but that is where he is at his best. That was vintage Juve Pogba.

"Every time Lingard was making that early run inside, he was occupying that position on the left.

"When you go back on your right foot — I used to go on the left myself — you can ping a ball on the other side, you can play that reverse pass, you can play a cute one-two, you can dribble past people. As we saw, he did it all in the second half.

"When he plays at that level he is almost unplayable and I think he changed the second half.

"He went up to a certain level. That's what you do as a captain. You say to your team-mates, 'guys, follow me. I'll show you the way.'"

"When he plays like that and when he plays on the left, coming in and being kind of free, it's very difficult to stop him," Henry added.

"Today he acted like a captain. That's very important too."

United moved up to second in the table, two points ahead of Chelsea – who are due to play Arsenal on Wednesday – and 12 points adrift of neighbours Manchester City.