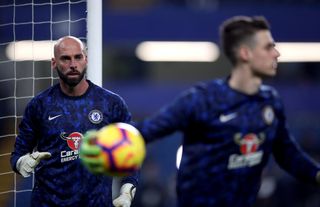 The 25-year-old Spaniard was axed for Willy Caballero, 38, in Saturday’s 2-2 draw at Leicester.

It was the first time Kepa had been left on the bench in the Premier League this term after a string of recent errors.

Frank Lampard talking us through the 2-2 draw yesterday, and his plans for the winter break… pic.twitter.com/orRW4mclxN— Chelsea FC (@ChelseaFC) February 2, 2020

Chelsea have kept just five clean sheets in the league all season and Lampard felt it was time to act.

“You make decisions every week and every day in this job. No decision is easy,” he said.

“When it comes to a goalkeeper you probably do give it a little bit more thought and a bit more time, especially if someone seems to be the designated number one.

“That can’t be the end of the story. We have to be competitive. Willy trains well, he acts well and he played well against Hull last week. I decided to stick with him.”

Harvey Barnes and Ben Chilwell put the Foxes 2-1 ahead before Rudiger’s second and boss Brendan Rodgers was left frustrated following the draw.

He said: “We were a wee bit slow out of the blocks but we grew into the game and created some really clear chances.

“In the second half we showed great personality to come from behind and by the end we’re disappointed not to have won it. It was a little bit frustrating by the end.

“If we couldn’t take the three points, take the point, so it’s two games against Chelsea where a team that have been in the top four, we’ve got two draws.

“The point I made to the players afterwards is, going forward, we want to be winning these games, and that’s a game that we should have won.”