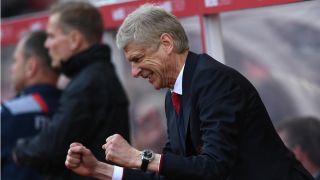 Arsenal manager Arsene Wenger insists he will not be influenced by the latest banner unveiled by protesting supporters, explaining he is not in politics and only focuses on football.

The Gunners romped to an impressive 4-1 away victory over Stoke City on Saturday, keeping their hopes of a top-four finish alive courtesy of a double from Olivier Giroud as well as strikes from Mesut Ozil and Alexis Sanchez.

But a plane banner with the words, 'Wenger – Out Means Out' was flown over the bet365 Stadium during the game as uncertainty continues to surround the future of the Frenchman, who is out of contract at the end of the season and yet to announce his plans.

An anti-Wenger banner was also flown in the away match against West Brom in March.

"I am not influenced by that at all," Wenger told reporters after the match.

"I want to focus on football. I am not in politics. All the rest, for me, is less important.

"I am in sport, I love sport, I give 24 hours a day for what I love and all the rest - I am in a public job, some agree with me, some do not. But I have no special opinion on that.

"I am paid to do my job, for a club I love, and I will do that as long as I am here, with full commitment. I have nothing else to say."

Wenger again stressed there was no update on his future following a report in France that suggested he would sign a new one-year deal and swiftly turned his attention to Tuesday's home match against relegated Sunderland.

"There is no information about that – nothing," he said of a potential new contract.

Wenger is hoping mid-table West Ham can do Arsenal a favour in the race for a Champions League spot by taking points off Liverpool when they do battle on Sunday.

Asked if he would be a West Ham fan for the match, the Gunners boss added: "Yes. I think the historically one of the qualities the Premier League has is that there is a pride in every team to give their best until the end of the season.