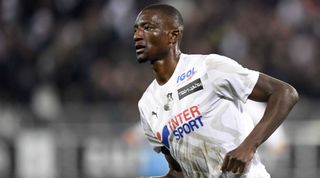 West Ham are the furthest along out the Premier League suitors in their pursuit of Guirassy, according to the Sun.

Amiens are likely to be relegated this season and will be hoping to make some money from player sales in the summer.

The Hammers have reportedly been tracking the £20m rated striker for months and are pressing on with the deal.

It's said that Amiens officials were in London recently to help negotiations along.

Tottenham are also believed to be following the player's situation as they seek back up for the likes of Harry Kane.

Jose Mourinho has expressed his frustration at the club not signing a striker in January to compensate for Kane's injury.

Now that Heung-Min Son has also suffered an injury, Mourinho finds himself with little to no striking options.

However, it seems that West Ham have the upper hand as they are offering Guirassy first-team football.

Sebastian Haller signed for the east London club last summer but has failed to assert himself in the Premier League.

David Moyes signed Jarrod Bowen from Hull City in the winter window, but the youngster is seen as needing time to develop.

Brighton are said to hold interest in Guirassy, but West Ham remain favourites to sign the Frenchman.