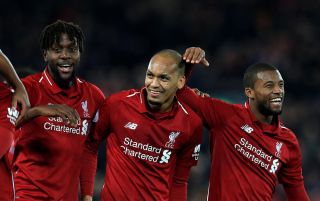 Georginio Wijnaldum insists Liverpool have the capabilities to cope should key midfielder Fabinho be ruled out for any length of time.

Manager Jurgen Klopp hoped the ankle problem sustained by Fabinho in the 1-1 Champions League draw with Napoli was not serious but has to wait for the results of a scan before he learns the extent of the damage.

The Brazil international has yet to be on the losing side in a Premier League match he has started – a run of 32 games – and has become a hugely-influential figure in the team.

He left Anfield with his left foot in a protective boot and although he was suspended for Saturday’s visit of Brighton, his participation in next Wednesday’s Merseyside derby could be in doubt.

Wijnaldum came off the bench and assumed the defensive midfield role when Fabinho was forced off against Napoli and has performed it numerous times before, although he admits the Brazilian’s absence is not helpful.

“It is a blow, a big blow for the whole team, of course also for him as a player but there are situations you have to deal with,” said the Holland international.

“I think during the years we have had a few blows, injuries, and we just have to show we can deal with the situation.

“I have played it (Fabinho’s role) last season. You think I am ready? We will see.

“We just have to show that it doesn’t affect us. During the years we had some difficult injuries and difficult positions, (like) last season when we didn’t have a defender.

“We just have to deal with it so we will see.”

Soon after Fabinho was forced off Anfield held its collective breath with Virgil Van Dijk laid flat out in the centre-circle after being hurt during an aerial challenge.

Napoli scored while the Holland captain was on the floor but despite initial worries he was able to pick himself up and complete 90 minutes.

Losing Van Dijk would be a nightmare scenario for Klopp’s Premier League leaders considering the impact he has had, and Wijnaldum admits even the players felt that concern.

“Everyone was worried, not only about Virgil but every player,” added Wijnaldum.

“The way we see it is every player is important for us as a team. Every player who gets injured, we are worried so we were worried when Fabinho was laying down on the ground but also when Virgil was.

"We tried to fight until the end of the game and that’s what we did." 👊@GWijnaldum was pleased with our resilience during last night's draw, but admits the side need to continue to 'work on' converting pressure into chances… https://t.co/a2YB7c1QuZ— Liverpool FC (@LFC) November 28, 2019

“We will have to see what is going to happen in the next few days.”

Failure to beat Napoli means Liverpool have to go to Austria in a fortnight likely needing a point against Red Bull Salzburg in order to progress to the last 16 of the Champions League.

With the club’s packed fixture schedule it was hoped that game would have been a dead rubber but now Klopp has to factor in the implications of not beating the Italians.

Disappointing result yesterday. Still on top, but it all comes down to the last match. We’ll be ready 💪🏾 #YNWA#LIVNAPpic.twitter.com/9URszkmKm9— Gini Wijnaldum (@GWijnaldum) November 28, 2019

“It comes to the last game so there is nothing we can change about it any more so what we have to do is to deal with the situation and try and get a good result.

“It is definitely going to be a tough game but it will be tough for both teams.”