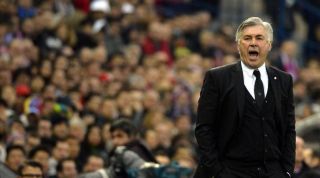 Real Madrid tactician Ancelotti is another experienced name in the mix according to reports and he is no stranger to England, having guided Chelsea to the Premier League and FA Cup title during two seasons at Stamford Bridge before he was sacked.

Former Chelsea assistant Wilkins, who was Ancelotti's right-hand man during his spell in London, said he believes the Italian would be the ideal man for the job.

"David Moyes was the right man last year after his time at Everton, but the name that jumps out at me is Carlo Ancelotti."

Ancelotti is into his first season with Real after arriving from French giants Paris Saint-Germain last year.

The 54-year-old is in a three-way battle with Madrid rivals Atletico and defending champions Barcelona for the La Liga and is preparing for a UEFA Champions League semi-final against Bayern Munich.

Despite winning the Copa del Rey, a failure to claim further silverware could spell the end of Ancelotti's tenure at the Bernabeu, according to Wilkins.

"The Copa del Rey is not enough for Real Madrid, so if he doesn't win La Liga or the Champions League, he may become available," he said.

"He speaks English, knows the Premier League and I think he would be ideal."