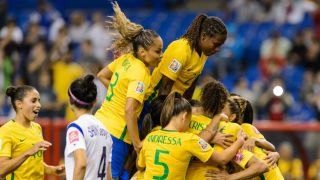 Marta notched her 15th World Cup goal when she converted a 53rd-minute penalty, moving a goal clear of former Germany striker Birgit Prinz, while her team-mate Formiga became the oldest player to score at FIFA's premier women's event when she slotted Brazil's opener in the first half.

Abby Wambach (13 goals) could challenge Marta throughout the course of the tournament as she remains a key player for United States.

Brazil have never won the Women's World Cup but started their campaign in comfortable fashion, although they needed some charity from South Korea to take the lead; Formiga pouncing on a dreadful back-pass in the 33rd minute to score.

Formiga was also involved in her team's second goal, earning the penalty after a foul from Cho So-hyun.

Earlier, 2011 semi-finalists France defeated England 1-0 in Moncton thanks to a stunning strike from Eugenie Le Sommer.

Le Sommer collected the ball around 30 yards from goal just prior to the half-hour mark and drove forward before crunching her shot into the top corner of the net.

In other matches, Colombia earned a 1-1 draw late in their clash with Mexico thanks to Daniela Montoya's rasping drive from the edge of the box, while Spain and Costa Rica also played out a 1-1 stalemate in front of a sparse crowd in Montreal.