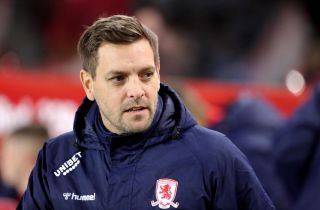 Middlesbrough head coach Jonathan Woodgate is confident his young guns will feel no fear as they prepare for their FA Cup showdown with Tottenham.

Woodgate, whose extra-time goal in the 2008 League Cup final secured Spurs their last major trophy, will send his team out at the Tottenham Hotspur Stadium on Tuesday evening desperate to dump his former employers out of the competition in a third-round replay.

The ex-England defender saw his Sky Bet Championship outfit go toe-to-toe with the Premier League side at the Riverside Stadium on January 5 to claim a deserved 1-1 draw, and is expecting much the same from his players.

He said at his pre-match press conference: “When they’re out there, they’ll be absolutely fine. We have a lot of young players, they’ll have no fear, so I’m really looking forward to it.

“I’m looking forward to seeing how they cope with the occasion. That’s the big thing.

“It’s a step up in class when you’re playing Tottenham Hotspur because they’re a really top team. I watched them play against Liverpool the other day and the atmosphere is special.

“Hopefully the players take it in their stride. Don’t play the occasion, just do what you’ve been doing, work as hard as you can and you never know, it can happen.”

Boro make the trip south – they will stay in London after the game to prepare for Friday night’s league clash with Fulham – in good spirits after losing just once in nine matches in all competitions.

However, Woodgate knows they will have to raise their game if they are to prevail against Jose Mourinho’s men.

He said: “We’ll have to, we’ll have to. The players are definitely capable of doing it and one thing is for sure, it won’t be for the lack of trying, that’s a fact.

“My players will give absolutely everything when they’re out there. That’s guaranteed.”

Striker Britt Assombalonga will be absent once again as he battles to shake off an ankle problem, while keeper Tomas Mejias will start, as he did in the first game, with Darren Randolph’s proposed move to West Ham yet to be completed despite the Republic of Ireland international undergoing a medical last week.

A perplexed Woodgate said: “It’s the longest medical I have ever known in history. I’ve had a few medicals myself and believe it or not, I passed a few.

“But this is unbelievable, really. Let’s see what happens over the next 48 hours.”