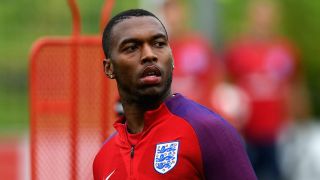 Alan Pardew plans to "protect" Daniel Sturridge during his loan spell at West Brom, having targeted a spot in England's World Cup squad for the Liverpool striker.

Sturridge has struggled to nail down a regular spot at Anfield since Jurgen Klopp's arrival as manager in October 2015, having scored 21 times in 29 games as Brendan Rodgers' side went close to the title in 2013-14.

The 28-year-old penned a deal until the end of the season with the Baggies ahead of the transfer deadline, but - with just five starts to his name in all competitions this season, and none since November - Pardew is prepared to take it slow to get the best out of the striker.

If Sturridge can recapture his best form at the Hawthorns, Pardew sees no reason why Sturridge would not form part of Gareth Southgate's plans in Russia later this year.

Pardew told reporters: "Daniel's deal runs until the summer and we will be managing him maybe a bit more carefully.

"Our fans were absolutely brilliant in the last home game and helped us win."Alan wants a similar atmosphere tomorrow...Full interview ️ February 2, 2018

"He is fresh because he hasn't had a lot of game time, so he could be that rarity for Gareth — a player who is fresh going to the World Cup.

"That is not in Daniel's thoughts, it is in my thoughts because I want England to do well.

"In the short term here he won't be pushed in training, we will protect him and make sure he gets to the games.

"He will slowly build his stamina over the games."

Sturridge made his West Brom debut with a 12-minute cameo in Wednesday's 3-0 defeat at Manchester City and Pardew is confident the striker will get better over time.

The Albion boss added: "He knows he has a better chance here of starting games than at Liverpool. Sometimes if you are only getting bit-parts in games it can be demoralising and your focus goes.

"I have already seen little flashes that have not just lifted me but everyone at the training ground because he can do things with the ball that are special. If we can see that on the pitch I think our fans are going to be very excited by him."