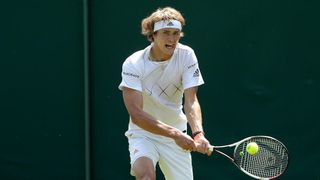 Alexander Zverev has been mocked by friend Marcelo Melo over Germany's exit from the 2018 World Cup, and he insists the tournament is over as far as he is concerned.

World champions Germany crashed out in the opening stage of the tournament for the first time in 80 years after a 2-0 defeat to South Korea in Group F.

And Zverev, the country's top-ranked tennis star, has been the object of Brazilian player Melo's fun.

World number three Zverev is turning his attention to Wimbledon, claiming there is no interest in the World Cup now until the next tournament in Qatar in 2022.

"[Melo] sent me a stupid Minions video of a Brazilian Minion dancing in front of a German Minion," Zverev smiled in his pre-tournament news conference. "I didn't talk to him for three days

"Brazil have to play now. Brazil are the favourites to win the tournament so we'll see how they do.

Zverev begins his Wimbledon bid against James Duckworth on Tuesday.