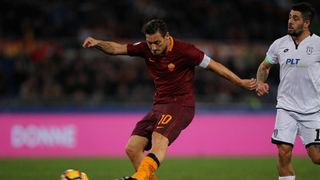 Totti was the hero at the Stadio Olimpico on Wednesday, converting a 96th-minute spot-kick as Roma survived to beat Serie B side Cesena 2-1.

It was all square after Luca Garritano's 73rd-minute equaliser cancelled out Edin Dzeko's opener in the second.

Roma will now face bitter rivals Lazio in a blockbuster city derby for a spot in the final and Spalletti thanked 40-year-old icon Totti.

"When Totti plays – but it's the same in training and even when he's playing with his boy – he's the Muhammad Ali of football, always looking to land that knockout blow: to swing the punch no one else can see," Spalletti said.

"If he's on the pitch, it's a good idea to give him the ball. The more they get him on the ball, the more they'll get back in return – you get more back from Totti than the bank.

"He's the one who brought the fans back into the stadium from the car park last year."

On a semi-final showdown with Lazio, Totti said:  "We're into the last four and hopefully we'll make it through to the final.

We're not thinking about the fact it's a derby – it's a semi-final like any other and we'll try to give a good account of ourselves."