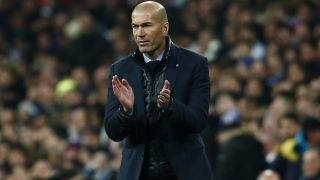 Zidane has come under fire after Madrid's struggles in LaLiga this season, with his side sitting 17 points behind leaders and rivals Barcelona.

A 3-1 win over Paris Saint-Germain in the first leg of their Champions League last-16 tie is sure to ease the pressure on the Frenchman.

But Kroos dismissed any criticism of Zidane, who has led Madrid to eight trophies since taking the helm at the start of 2016.

"In a team like Real Madrid, arguments always arise when things are not going well," Kroos said, via Marca.

A double from Cristiano Ronaldo helped Madrid to their first-leg win over PSG, putting them on track for the quarter-finals.

Kroos talked up the importance of the Champions League, a competition the LaLiga giants have won the past two seasons.

"We have gone through a difficult phase, but in recent weeks we have raised our level and I am confident that we will be very successful going forward," he said.

"This victory is very important because the Champions League is the only competition we can win right now.

"Although I didn't feel all of the pressure was on us because we won the last two. We are Real Madrid, so it's always there."