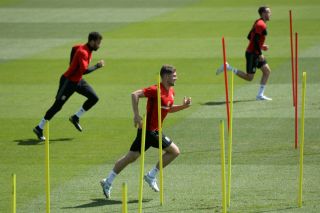 So who’s the fittest? Footballers? Cyclists? Rugby players? It’s hard to measure because every sport requires a different skill set. But one thing is certain: combine the strengths of each and you’ll become some kind of robo-mega-athlete. To help you decide what to do away from the pitch, FFT looks at the demands of eight of the world’s toughest sports and reveals what you could gain from a little sporting infidelity…

Cycling
Why are cyclists so fit?
A professional cyclist’s race calendar stretches from January through the Tour de France in July to October. “In that time they could rack up 80 to 90 days of racing,” says Ken Matheson, current Rapha cycling coach and Chris Boardman’s former mentor. “With an average duration of five hours, that’s 400-500 hours of racing.” That doesn’t include training, which would regularly comprise 30-40 hours per week.

What you need to be a cyclist…

“One pro workout is a six-hour effort, at an average speed of 20mph, with 3,000m of climbing,” explains Matheson. “You’d need to consume 2,000 calories during this ride; that’s equivalent to 10 energy bars.”

Why are badminton players so fit?

“It’s a high-intensity, intermittent activity,” says Sarah Gilchrist, exercise physiologist at the English Institute of Sport. “You need a strong body to cope with the repetitive lunging.”

What you need to be a badminton player…

Why are rugby players so fit?

What you need to be a rugby player…

“I’ve worked with many 800m runners and it’s a gruelling sport,” says Gilchrist. “You need to work at a high percentage of your VO2 max, right on the lactate threshold.”

“You’re looking to sustain a high velocity for a reasonable time,” says Gilchrist. “You must do high mileage over the winter for an aerobic base, before picking up speed with more intense track work, circuit training, gym sessions and interval work.” Try three sets of 4 x 200m flat-out. Take 30 seconds rest between each rep.

Why are F1 drivers so fit?

Nineteen races of two hours’ duration are physically and mentally exhausting, with cornering eliciting forces of up to 3.5G. “They’re some of the fittest sportsmen I know,” says exercise physiologist Garry Palmer. “Eddie Jordan once went to a hotel’s gym at 3am and there was Michael Schumacher on the treadmill.”

What you need to be a Formula One driver…

“Most of the races are clockwise, so you build an imbalance in neck strength. Some – like Brazil – are anti-clockwise, so Jarno Trulli created a helmet-pulley system designed to strengthen the other side of his neck,” reveals Palmer.

Karate
Why are martial artists so fit?
“Karate is an explosive sport,” says Palmer. “That’s upper and lower body.” Surprisingly, perhaps, cardiovascular fitness is also a pre-requisite. “I told the English karate team to base train – steady-state running – and they were all moaning about it, but then their recovery improved and their win rate did, too.”

What you need to be a martial artist…

Execute squats, twists and sit-ups with a medicine ball to simulate and strengthen your movement.

Rowing
Why are rowers fit?
Olympic distance is 2,000m; elite rowers do that in five to seven minutes depending on crew number and stroke. “You need one of the biggest engines in sport,” says Gilchrist. An average adult’s lung capacity is six litres – GB rower Pete Reed’s is 11.68.

What you need to be a rower…

One of a rower’s three daily workouts regularly involves rowing up and down a lake for up to 30km at an intensity of around 70 per cent of maximum heart rate. Just make sure you wear gloves.

Why are Ironmen so fit?

Swimming 3.8km, biking 180km and finishing with a marathon demands high levels of fitness. “Beyond the aerobic engine, the resistance of water increases strength in the back, lower trunk and legs; cycling develops quads and hamstrings; running hits the calves,” explains Ironman veteran Mark Kleanthous.

What you need to be an Ironman…

“Bike really hard for 60 minutes, then run for 30 at the fastest pace you can hold,” says Kleanthous. “This results in a much higher average heart rate than running for 90 minutes alone.”

Footballers: In a league of their own

“At Newcastle United we measure the physical performance of our players in training and games,” explains Harley. “As a team we cover between 115,000m and 123,000m per game, with individual players covering around 10,000m to 13,000m depending on their position.

“Players need a well-developed aerobic energy system, which we build through both match exposure and training, using a variety of small-sided and possession-based games, and running drills.

“When not playing midweek, teams will train on Monday, Tuesday, Thursday and Friday, with recovery Wednesday and Sunday.

Our training is periodised to include high/low volume and intensity days, including gym-based strength and conditioning, and recovery sessions.

This equates to between eight and nine hours of physical exercise per week, including one 90-minute game.”