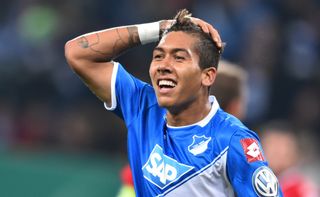 Part of any top football scout's job is to do whatever it takes to sign the brightest talents in world football. But for Ernst Tanner, chief talent-spotter at Bundesliga club Hoffenheim between 2009 and 2012, getting a look at a 19-year-old Roberto Firmino even meant handing out bribes.

The sporting director had just made the 7,000 mile trip from Germany to the Brazilian city of Figueirense to get a look at Firmino, who had been recently named the 2010 breakout star of Brazil's second-tier. After traveling hundreds of miles to see an away game in which Firmino barely featured, Tanner decided to watch a pre-match training session at the club's home ground. That, though, was easier said than done.

“I turned up and they wouldn’t let me in the stadium,” Tanner says with a sigh. “I hadn’t travelled all that way for nothing, so I bribed one of the guards. I said that I was a tourist; a groundhopper who just wanted a look inside the stadium. Eventually, he let me in.”

Despite the complications, Tanner’s mood was lifted when he finally got a glimpse of Firmino in action.

“He was so quick, he had balance, he could head the ball and he worked well defensively,” Tanner tells the July edition of FourFourTwo, which you can available now with free delivery. “In that one training session, I saw exactly what I wanted. I was convinced we had to sign him.”

But if Tanner was impressed that afternoon by the forward’s ability, Figueirense’s manager Marcio Goiano appeared not to be.

“Firmino was the most criticised player in the whole squad,” says Tanner. “The other players simply stood around laughing as the coach laid into him all afternoon. It looked as if he couldn’t do a thing right.”

Years later, when both men were working for Red Bull – Tanner with Salzburg and Goiano at Bragantino – Tanner asked his colleague why he had been quite so tough on Firmino that day.

“He said it was his job to make sure Firmino realised his full potential,” grins Tanner, before breaking into laughter. “Then he asked how the hell I watched that training session when it was closed to the public.”

For Tanner, Firmino’s thick skin said plenty about his character, and helped to convince him of the teenage attacker’s potential value to Hoffenheim.

“Many younger players would have walked off the training pitch following that sort of treatment,” admits the sporting director, who now works for MLS side Philadelphia Union. “But Firmino stuck it out. I liked that.”

Tanner's recommendation was enough for Hoffenheim to agree to pay Firmino's €4m release clause. It would turn out to be a great piece of business too, with the Brazilian going on to score 49 goals in 153 appearances, before earning a big money move to Liverpool.

Had Tanner not been so tenacious in his attempts to get a look at Firmino, and had the security that fateful afternoon not been so "persuadable", Liverpool's wait for a Premier League trophy may still be rumbling on.