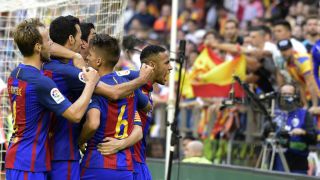 Josep Maria Bartomeu insists Barcelona will fight to the end to defend the honour of the club's players after they were accused of inciting disorder among Valencia supporters.

Neymar and Luis Suarez were among the players struck by objects thrown from the stands at Mestalla as they vociferously celebrated Lionel Messi's late winner in a 3-2 away victory last weekend.

While Valencia were fined, Barca were also criticised for "reproachable behaviour" by the Competition Committee of the Spanish Football Federation (RFEF), the visitors having been deemed to have antagonised the home fans.

And Bartomeu, speaking at the club's annual general meeting, showed no indication of taking a backward step in the deepening row.

"I will talk today about an attack against us through the imprudent and irresponsible comments of Javier Tebas and the Competition Committee," the club president said.

"The remarks are an example of those that should never be made by people and organisations who should be making responsible statements.

"We won't stop the fight and we'll go to the end. We have to defend the honour of our players.

"We're tired of these campaigns that distort reality and that respond to partisan interests. They try to achieve off the pitch what they can't manage on it.

"We'll continue defending, you can have no doubt of that."

Barca are at home to Granada in LaLiga on Saturday.