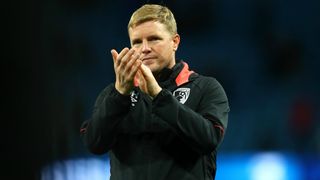 Eddie Howe insists he has no interest in speculation over the managerial positions at Manchester United and Tottenham.

The Bournemouth boss has been tipped as a possible candidate to take over at Old Trafford once Ole Gunnar Solskjaer's interim spell in charge is over at the end of the season.

With Spurs boss Mauricio Pochettino the favourite to become Jose Mourinho's permanent successor at United, Howe has also been linked with taking over in north London if the Argentine were to leave the club.

However, the 41-year-old's focus is solely on Bournemouth's Premier League clash with Brighton and Hove Albion on Saturday.

"It's not for me to comment on speculation," he said when asked if Pochettino was a good fit for United. "I've got no interest. My focus is on Brighton."

Howe also confirmed he has spoken to Chelsea assistant coach Gianfranco Zola, after he said the Blues were interested in a January move for Bournemouth striker Callum Wilson.

"I spoke to Gianfranco afterwards and, yeah, we had a little chat about that situation," he said.

"But Gianfranco is an incredible person and a really nice guy. And, you know, Callum, from our perspective, is a huge part of what we are doing here."