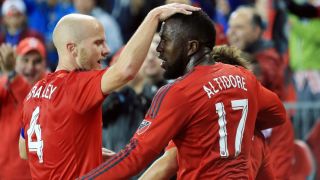 Jozy Altidore scored a late winner to lift Toronto FC past Orlando City and top of the MLS Eastern Conference, while LA Galaxy salvaged a draw at Chicago Fire.

United States international striker Altidore came off the bench and scored with four minutes remaining as Toronto emerged 2-1 winners in Orlando on Wednesday.

Played in by reigning MLS MVP Sebastian Giovinco, Altidore sprung the offside trap, rounded the goalkeeper and tucked the ball into an empty net.

Orlando almost salvaged a point in the second minute of stoppage time but Cyle Larin hit the post.

Larin had equalised in the 56th minute, cancelling out Tosaint Ricketts' seven-minute opener.

The result propelled Toronto to the top of the east, two points clear of New York City, while Orlando are a point adrift of the sixth and final play-off spot.

Trailing 2-1 after Arturo Alvarez and David Accam cancelled out Gyasi Zardes' 31st-minute opener in the space of five minutes, Dos Santos beat his opponent to the ball as he curled home the equaliser with the outside of his boot.

Elsewhere, Montreal Impact and DC United played out a 1-1 draw in Canada.