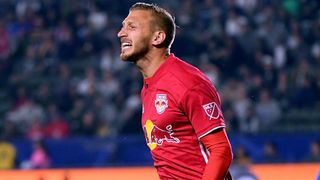 New York Red Bulls set up an Eastern Conference Finals clash against Atlanta United after both eased through in the MLS play-offs on Sunday.

The Red Bulls went into their tie against Columbus Crew trailing 1-0, but Daniel Royer's brace and Alex Muyl's goal saw them to a 3-0 second-leg win.

The 3-1 aggregate success moved the Supporters' Shield winners into the conference finals, where Atlanta await.

Josef Martinez's double helped Atlanta past New York City 3-1 – and 4-1 on aggregate – in their semi-final.

At Red Bull Arena, Muyl put the Red Bulls ahead in the 17th minute to level the tie, but they had to wait until the second half to seal their success.

Royer completed a team move in the 73rd minute before unleashing a fine strike from 20 yards soon after to seal the hosts' win.

Atlanta, already in control of their tie, took command earlier, with Martinez opening the scoring from the penalty spot in the 25th minute.

Miguel Almiron's superb free-kick doubled their lead and Martinez sealed their win after Maxime Chanot had given City some hope away from home.

In the Western Conference, Sporting Kansas City booked a spot in the finals against the Portland Timbers.