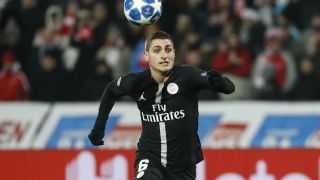 Verratti sustained the injury early on in Saturday's record-equalling 9-0 win over Guingamp at Parc des Princes.

PSG have not placed a timescale on the Italy international's return to action but the news appears to represent an improvement on head coach Thomas Tuchel's fears Verratti had suffered a "serious" setback.

A club statement read: "Marco Verratti's MRI scan conducted after the match against Guingamp confirmed a twisted left ankle without any further damage.

The evolution of the injury over the coming days, with treatment and further examinations, will allow the club to establish how long the player will need to fully recover."

The injury places Verratti's participation in the first leg of PSG's Champions League last-16 clash against Manchester United at Old Trafford on February 12 in doubt.