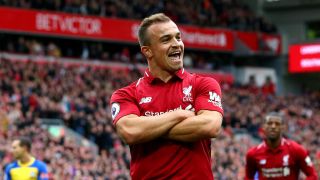 Jurgen Klopp says it was always his idea to replace Xherdan Shaqiri at half-time against Southampton but accepted it was difficult to tell the Switzerland international of his decision.

Shaqiri was handed his first Premier League start since joining from Stoke City and played a key role as a number 10 behind the front three of Sadio Mane, Mohamed Salah and Roberto Firmino.

It was Shaqiri's shot that deflected in off Wesley Hoedt to open the scoring, with Salah tapping in the third from close range after a brilliant free-kick from the debutant struck the underside of the crossbar.

Klopp brought on James Milner at the break as Liverpool eased to victory to maintain their perfect Premier League record and he explained his choice in a post-match news conference.

"No it was not easy, to be honest. It's my job to sometimes deliver news nobody wants to hear," Klopp told reporters. "That's how it was at half-time, but he's a fantastic boy so there was no problem.

"I explained it to him, usually I don't explain substitutions but I thought today it made a bit of sense. It's just good to have him. You saw the free-kick, it was outstanding. What a ball!

"The whole team was not used to the system today and as a new player usually you struggle most, but he didn't. He tried everything, the only problem was defensive. Offensively, it was a good idea, but we have to work a bit more on that. He was good, I liked it.

"I would have done the same if it had been 2-0. That was the plan. We saw that we had a few problems. In the week you saw with Gini Wijnaldum, good game but really hard, Hendo [Jordan Henderson] second game in a row, Milly [James Milner] came on and it was hard work for him too."

A run of seven straight victories in all competitions brought up Klopp's 600th league game as a manager but the German is already looking ahead.

"I lost seven games in a row once, that felt different! But then we won the eighth game 5-0, very cool!" Klopp said.

"It's a surprise, but all the performances we showed so far were good enough to win the games. Different challenges, different styles of opponent, the boys were there, really in the situation and in the game.

"That's good, but the next one is coming! Coming on Wednesday, then Saturday, then Wednesday again, and then the period ends with a nice game against Man City. It will be tough, but for all of us. I am really sure we are mature enough to understand it."

Southampton manager Mark Hughes accepted the gulf between the sides shown in the opening 45 minutes but felt there were positives to take after the break.

"We were 3-0 down at half time and there is a danger you go completely under and that would have damaged us even more than the 3-0 performance in the first half," Hughes said.

"We avoided that because we stuck at it, stuck in the game and tried to do the right things and saw the game out in the second half.

"You can argue that maybe Liverpool took their foot off the gas, which I acknowledge, but we still had to remain in the game, keep vigilant and make sure we got blocks in when they created moments.

"In the end we take a little bit of comfort from the second half performance in terms of not going under but clearly the damage was done in the first half."