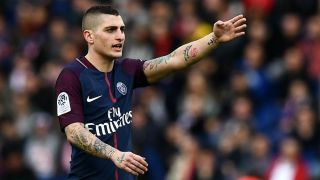 The Italy international, 26, returned to training on Monday after being sidelined with a sprained ankle sustained last month.

That was a boost to PSG, who are set to be without Neymar until April, ahead of their Champions League last-16 tie against Manchester United beginning next week.

But after Verratti missed his side's extra-time win over Villefranche in the Coupe de France on Wednesday, Tuchel revealed the midfielder had suffered a fresh injury.

"Marco Verratti could not finish training yesterday [Tuesday]. He had problems," he said.

"I have to wait until tomorrow [Thursday] to decide if he can play against Bordeaux.

"His new problem is something else, but I do not know too much."

PSG host Bordeaux on Saturday before making the trip to Old Trafford for the first leg of their tie with United three days later.

Incredible effort from the hosts to keep Paris at bay well into extra-time. Thomas Tuchel's men were able to break them down and it's the Rouge et Bleu who progress to the next round! pic.twitter.com/1SoKAjJuXy— Paris Saint-Germain (@PSG_English) February 6, 2019