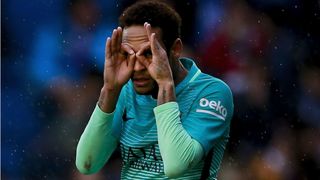 Marco Verratti feels Neymar is on par with Barcelona team-mate Lionel Messi, singling out the Brazilian as the one player he would sign for Paris Saint-Germain.

Neymar has been linked with a move to the Parc des Princes on more than one occasion, but his long-term future appears to be at Camp Nou after he signed a new deal until 2021 back in October 2016.

Nevertheless, Verratti is in awe of the former Santos man following his stellar displays in Barcelona's Champions League win over PSG and would love to see him at the Ligue 1 champions.

"If I could sign one player for PSG it would be Neymar," the Italy international told beIN Sports.

"He is still a young player and he was impressive in the two games against Barca.

"He has made a formidable step forwards this season. He is at the same level as Messi.

"He is the same age as I am and would be a great player for the future."

The 25-year-old Neymar has scored 15 goals in 38 appearances in all competitions this term, including four goals in the Champions League.