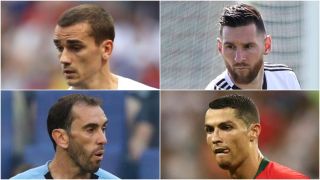 After 32 nations arrived at the World Cup, 16 are left standing in Russia.

The group stage offered great drama and intrigue, both on and off the field. However, whether they made serene progress or squeezed through, all teams in the knockout stages will believe they can go all the way.

Juicy ties have been lined up for the second round, with France against Argentina arguably the pick in a stacked top half of the draw, while the likes of England and Colombia may feel a path to the final has opened up.

Ahead of the opening knockout round, we take a look at the runners and riders who remain in the field.

A true heavyweight clash kicks off the knockout stages, as France and Argentina do battle in Kazan. This, on paper, should be a shoot-out between two star-studded teams, yet these footballing superpowers have yet to convince in Russia. Les Bleus did win Group C, yet they managed three goals. Argentina, meanwhile, needed a late goal from Marcos Rojo to finish second in Group D. Lionel Messi's World Cup dream lives on, but La Albiceleste need to improve – and quickly – if they are to go one better than four years ago in Brazil.

Key battle: It has been a relatively quiet tournament for Messi, who has only scored once at Russia 2018, but the Barcelona superstar will fancy his chances up against France's raw left-back Lucas Hernandez.

Top stat: The 55 fouls won by Argentina is the most of any team at Russia 2018 - eight clear of eliminated Panama.

At Euro 2016, Portugal laboured in qualifying before going on to win the trophy. Can history be repeated in Russia? Well, if Cristiano Ronaldo is to lift the World Cup, he will have to find a way to score against a Uruguay defence that kept three clean sheets in Group A. With Luis Suarez and Edinson Cavani capable of grabbing goals, Oscar Tabarez's well-drilled side know they are always in with a chance. Still, if Argentina and Portugal progress, it will Messi vs Ronaldo in the last eight.

Key battle: Ronaldo has made his mark on the World Cup already, with a superb hat-trick against Spain. Atletico Madrid defender Diego Godin will be a familiar foe from LaLiga derbies, but the Uruguay captain is one of the toughest centre-backs around.

Top stat: Uruguay are the only team yet to concede a goal at the World Cup, keeping clean sheets in all three of their group games.

After two impressive wins over Saudi Arabia and Egypt, Russia came back down to earth with a bump against Uruguay, with the 3-0 defeat seeing them finish second in Group A. That result means a tricky tie against Spain, who needed a stoppage-time equaliser from Iago Aspas to avoid defeat against Morocco. The 2010 champions conceded five goals in the round-robin stage and also let in three when they met Russia in a friendly fixture in November 2017.

Key battle: Diego Costa provides the razor-sharp cutting edge for Spain and will relish a clash with Sergei Ignashevich - will the 38-year-old be up for the fight?

Top stat: The 307 passes successfully completed by Spain captain Sergio Ramos is more than any other player at the World Cup.

Croatia were a cut above the rest in Group D, winning three out of three at a World Cup for the first time to top a potentially tricky looking pool with ease. Their most impressive result came against Argentina, as they crushed their main rivals for top spot. Next up is Denmark, who benefited from playing out a forgettable 0-0 draw with France, albeit it means Kasper Schmeichel (two) has now kept more clean sheets in the tournament than his father, Peter (one), managed. The Scandinavian nation scored twice but conceded only once in qualifying ahead of Australia and Peru.

Key battle: While not a direct match-up, there is no doubting midfielders Luka Modric and Christian Eriksen are the key men in this one. Modric has scored in two games out of three at Russia 2018, while Eriksen's shoulders carry both Denmark's creative and goalscoring threat.

Top stat: Schmeichel's 12 saves at Russia 2018 can only be beaten by Mexico's Guillermo Ochoa, while the Dane has a save percentage of 92.3 per cent at this World Cup.

Brazil are favourites to win the World Cup, but Mexico promise to provide a stern test, with CONCACAF's sole remaining representatives having already contributed to holders Germany being dumped out early. Brazil are unbeaten and have only conceded one goal so far, but there is a sense there is more to come from a squad that qualified at a canter from the notoriously tough South American section under head coach Tite. Mexico have gone out at the last-16 stage at six successive World Cups, so this round may be as far as they can go in Russia.

Key battle: Neymar is yet to hit top gear at the finals, with 20-year-old right-back Edson Alvarez likely to be charged with keeping the world's most expensive player quiet.

Top stat: The 57 shots recorded by Brazil so far is the most of any team remaining in the World Cup - Germany managed 72 despite being knocked out.

A rich seam of talent all appearing to peak at the same time makes Belgium genuine contenders, although the likes of Kevin De Bruyne and Eden Hazard were knocked out of the European Championships by Wales two years ago. Japan squeaked into the knockout rounds in the strangest of circumstances, Senegal missing out on the last 16 due to their inferior fair play record. The Samurai Blue, Asia's last team at the finals, will be outsiders having never reached a World Cup quarter-final, while only Russia have a lower FIFA ranking.

Key battle: Marseille defender Hiroki Sakai is expected to start at right-back for Japan, where he will be marking Hazard - the Chelsea winger seeking to add to his brace against Tunisia in Group G.

Top stat: With nine goals scored in their three group games, Belgium are the top scorers in the competition.

Suspension rules out Switzerland defenders Fabian Schar and Stephan Lichtsteiner, while Sebastian Larsson misses out for Sweden in what is arguably the weakest of the last-16 ties despite Zlatan Ibrahimovic claiming his country will "probably" win the World Cup. Switzerland held Brazil in their opening game before beating Serbia and drawing with Costa Rica sent them through, but even though FIFA rank them the sixth best in the world, they have not reached the last eight since hosting the tournament in 1954.

Key battle: Xherdan Shaqiri hit a late winner against Serbia and he is his team's biggest attacking threat, with Sweden's left-back Ludwig Augustinsson - who scored their opening goal in a 3-0 win against Mexico - likely to be tested defensively.

Top stat: Sweden's game against South Korea saw the most fouls (43) of any game at Russia 2018 so far.

Concluding the round of 16 is Colombia v England, with both sides likely to be thinking ahead to a possible clear run to the semi-finals due to being paired with Sweden and Switzerland in the last eight. Gareth Southgate rested eight players - including captain and star man Harry Kane - for the Group G closer against Belgium, with the Three Lions' momentum potentially hurt by a 1-0 loss to Belgium. Colombia coach Jose Pekerman will hope James Rodriguez recovers from an injury that saw him start on the bench in their opening loss to Japan and be replaced in the first half of a decisive defeat of Senegal.

Key battle: Yerry Mina's two goals have been vital for Colombia, but the Barcelona defender will have to be on his toes to keep out Kane, who should be fresh after sitting out the Belgium defeat.

Top stat: Kane is the top goalscorer at the World Cup, the Three Lions captain scoring five goals to lead the race for the Golden Boot despite sitting out their loss to Belgium.