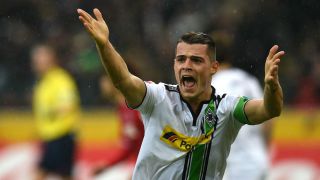 Granit Xhaka has all but confirmed he will leave Borussia Monchengladbach amid reports he has already agreed personal terms with Arsenal.

The Switzerland international has been heavily linked with a move to the Premier League side in recent weeks, even if he recently stressed he would be happy to stay at Gladbach if a transfer did not materialise.

However, the 23-year-old has now admitted he might have played his last game for the club already.

"There will be regular talks now and a final decision will be made before Euro 2016," Xhaka told Bild when questioned about his future.

"I started my Borussia career in the DFB-Pokal against Darmstadt. I then had four wonderful years here. And now I played what could have been my last game for Gladbach against Darmstadt, too.

"The circle has been closed."

Monchengladbach director Max Eberl is adamant the club are keen to hold on to the midfielder, but they are ready to cash in on Xhaka if the price is right.

"Of course, we want Granit to stay," Eberl stated.

"But we know that there are a number of interested clubs.

"And there could be a point where we will have to say yes to a deal."