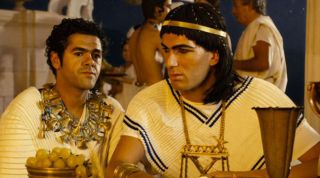 Believe it or not, some footballers have transitioned successfully to the acting world. Vinnie Jones isn’t everyone’s cup of tea, but he’s carved out a niche for himself as a stone-faced hatchet man (a real stretch). Eric Cantona also just plays himself in his most acclaimed role, Looking forEric, but does so with panache. Plus he’s great in those beer adverts.

Cantona’s countryman Frank Leboeuf actually featured in an Oscar-winning film, playing a doctor in Stephen Hawking biopic The Theory of Everything. Carlo Ancelotti also played a medical man, in a Star Trek Beyond cameo which we haven’t seen but are immediately gutted that it didn’t lead to a full-scale spin-off series. Dr Ancelotti: In Space!

Anyway, that lot were fine, but this lot really weren’t. Here’s when it all went a bit wrong for footballers trying to act...

David Beckham in King Arthur Legend of the Sword

When the Lord created Becks, he gave him multiple gifts: athleticism, good looks, excellent hair and a right foot so dextrous it could open tinned food. To balance that out, he also gave him the voice of a shy mouse and clearly zero acting ability.

Playing the minor role of “Trigger” in Guy Ritchie’s panned Arthurian epic, Beckham doesn’t convince as a gruff medieval type with a plastic conk. Although with dialogue such as: “Bouncing on my knee. Where d’you think I want ya?” we’re not sure Marlon Brando himself could have pulled off this role without looking like an idiot. So let’s give Becks his favourite thing – a pass – on this one.

Collymore is drooling in the passenger seat of a speeding sports car as Sharon Stone gets very excited in the seat next to him. Watch it here but yikes: NSFW, people. We should point out straight away that this is a film scene and definitely not real life.

The former Nottingham Forest striker plays the role of football star Kevin Franks and his part lasts about as long as it took the screenwriters to come up with that name. He’s bumped off before the credits finish as the car veers into the River Thames, and while it’s probably unfair to criticise Stan’s acting when all he does is moan a bit and get slapped by Stone, he does look a bit silly throughout. (Kevin) Franksly, Basic Instinct 2 is such a turkey that Stan’s acting career looks to have sunk with it.

Wayne Rooney in a wine advert

Rooney is far from alone in being that curious animal: a footballer who isn’t convincing even when playing themselves. “The boss said that a new devil is arriving,” intones Rooney with all the enthusiasm that indicates Sir Alex has just told to him that Eric Djemba-Djemba has re-signed with Manchester United.

The reactions from Rooney’s co-stars Ryan Giggs and Patrice Evra (definitely not his voice) aren’t much better, but as the leading man, Rooney must bear the brunt of the criticism. “They say he is a legend,” he adds in comatose style, before watching a fireball hurtle across the Old Trafford pitch and explode into one of the goals.

Rooney’s reaction? To stroke his chin impassively. Holy hairpiece, Wazza, how much delicious Chilean plonk have you actually quaffed to stay this calm in a crisis?

Jossy’s Giants was a 1980s kids’ TV series set in Newcastle about a wayward children’s football team. It boasted a belting theme song, was written by darts commentary legend Sid Waddell and also somehow managed to nab cameos with a couple of bona fide England and Man United legends.

Bryan Robson appeared once but his rancid acting was genuinely so atrocious that the internet appears to have wisely deleted all record of it. Bobby Charlton is actually more convincing. Admittedly, his phone call with Jossy to arrange a tour of St James’ Park is rather stilted and Sir Bob follows this up by spending too long extolling the virtues of “a really good plunge bath” to a group of kids who probably just want to go out and run about on the pitch to be honest.

However, if Hollywood didn’t come calling, Charlton at least comes across as hugely likeable. Show us the referees' quarters again, Bobby!

Pele in Escape to Victory

SEE ALSO How many of the footballers from Escape to Victory can you really remember?

There’s one eternal question around this 1981 cult classic about a group of Allied prisoners of war who escape via the power of football. Namely, which is worse: Sly Stallone’s goalkeeping or the cast of footballers' attempts at acting?

Pele plays the star role of Corporal Luis Fernandez. John Wark told FourFourTwo that the great man nailed his all-important bicycle kick on the first take, but his off-pitch acting left something to be desired. His dialogue delivery, unlike his play, is rushed and mumbled, even if we did enjoy his blackboard set-to with manager Michael Caine.

We get the feeling that if Pele tried jumping up and snatching the chalk from Tony Pulis’s hand when he was delivering a tactical masterclass, O Rei would be left chewing on blackboard and a place on the bench behind Rory Delap.

Ally McCoist in A Shot at Glory

We’re sorely tempted to slide this into the positive category. Ally McCoist doesn’t just read a few lines off an autocue like a football zombie, he actually plays the lead in this 2000 film about a fading ex-Celtic (!) striker brought in from Arsenal to play for fictional Highland side Kilnockie FC. Coisty certainly has leading-man charm, plus more eye-twinkle (and definitely more acceptable views) than Mel Gibson.

However, it isn’t enough to save this predictable underdog yarn which somehow also features a post-Batman Michael Keaton and Robert Duvall. The latter plays a gruff manager and he almost certainly considers this his finest work alongside those two Godfather films. It’s kind of insane that this got made really, but it does give us an idea of how Unai Emery can trim some fat from the Arsenal squad. Send Mohamed Elneny to Buckie Thistle FC? It’s worth a try.

Michael Owen in a whiskey advert

“Every time I step into the ring, the spirit of a warrior courses through me.” Right. It looks like Michael Owen accidentally picked up the script to Rocky VII: Adrian’s Revenge instead of the Spey whiskey commercial he was supposed to be shooting. But clearly the director just decided life was too short and chose to ride it out like Michael aboard one of his massive stallions.

Owen is pulling the Rooney trick here of playing himself, such as it is, while also talking about something he's genuinely interested in (horse racing). Yet he does so with a total absence of emotion, until he finally musters some vigour to give us a closing: “Shh! Keep the secret” so terrifying that Freddy Krueger himself is watching it and crying horrified into his big claw hand.

Cameos galore in Goal!, the big-screen football trilogy which charts the progress of Santiago Munez from LA to Real Madrid via where else but Newcastle. Keep your eyes peeled for everyone from Lionel Messi to Igor Biscan, but it’s Alan Shearer’s wordless display that captivates for the wrong reasons.

Playing a role you may well have seen in real life – 'worst bloke ever in the gym' – Shearer exudes King of the Douchebags menace. As our impoverished hero struggles to exercise his puny legs, mighty Alan glowers at him until he leaves the weights machine. Shearer silently mocks his light setting, then begins powering through heavier reps with his thunder thighs, leaving the deflated youngster with nowt but a mocking grin. Welcome to Newcastle, Santiago.

Ian Wright in Gun of the Black Sun

He’s a cut above the likes of Owen and Rooney, as you’d expect, but then we’d set the bar high for Wrighty. Whatever springs to mind when you think of Ian Wright (for us it’s 'loads of goals for Arsenal’ and ‘a 10-year-old trapped in the body of a grown man’), he’s certainly a charismatic chap. This led us to believe he could – please – blow Vinnie Jones’s acting career out of the water. Or wowtah, as either man might put it.

Yet he won’t if he keeps on starring in tripe such as Gun of the BlackSun, a gangster flick that’s as bad as its title. Wright is actually fine as the ‘Duke’ but rather understated, possibly because he realises just what codswallop dialogue he’s being forced to gurn through. Why can’t they just let Wrighty off the leash? On second, thoughts, we take that back.

Zinedine Zidane in Asterix at the Olympic Games

A contender on several critics’ lists for the worst film of 2007, this prize turkey based on the long-running French comic had cameos from Michael Schumacher (in a chariot race), Amelie Mauresmo and – bizarrely – football genius and future Real Madrid manager Zinedine Zidane.

His scenes begin with a randy chap who looks like Dani Alves losing his ball to Zidane. The pair then exchange some muted dialogue, presumably about Spanish football dominance, before Zizou proceeds to break out a few flicks and tricks.

He’s good at that bit, as you might expect, but it’s his appearance that truly startles. The enigmatic Zidane appears to be dressed like some kind of Egyptian god, complete with thick eyeliner and head-dress. Curiously alluring, just like the man himself, but this display probably won't get him the big call up to take the lead role in a Cleopatra biopic. For shame.