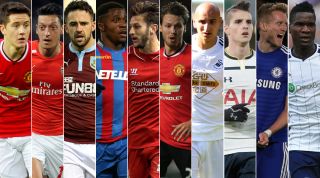 Herrera seemed the ideal signing for Manchester United this summer, after the club activated his €36 million release clause at Athletic Bilbao. Tom Cleverley had failed to fill the boots of Paul Scholes, and Marouane Fellaini looked clumsy and out of place in deeper central midfield role. United’s midfield had stopped dictating games under David Moyes: the Reds had lost their meanness from the Sir Alex Ferguson era.

Herrera, a midfielder with a little bit of everything, was the man to fix that.

But he hasn’t quite begun quite how he'd have liked at Old Trafford. A mixture of injuries and inconsistency has seen him start just six league games, and we're yet to see the Spaniard display his best form. A sumptuous volley against Yeovil last weekend highlighted his talent, but with a huge budget at United’s disposal, the 25-year-old will hope for a more defined role in the team before the season's end.

This time last year Ozil could do no wrong at Arsenal, with the Gunners holding top spot in the Premier League as they entered 2014. The Germany international signed from Real Madrid seemed to have brought an extra level of creativity with him from the Bernabeu that could help the Gunners genuinely challenge for the title.

But as Arsenal’s league hopes began to crumble in spectacular fashion, so too did Ozil’s form. The German appeared unsuited to his starting berth on the left, and his impact diminished as the campaign wore. He was, of course, part of the Germany side that stole the show in Brazil, yet he still failed to reach his best on a personal level. This season he has been out since October with injury, and Wenger’s men have struggled in his absence. Arsenal fans will be hoping his return to the side will bring some added guile alongside the irrepressible Alexis Sanchez.

Ings’s return of five goals in a struggling side this season has been a solid one, and if he is to remain a top-flight player it will simply be a case of maintaining his current level of performance. The major question is whether that will be with Burnley or not.

The Clarets have battled valiantly to keep themselves within touching distance after a difficult start, but they remain in the bottom three with just over half the season gone. Ings’s contract is up in the summer, and his form for the remainder of campaign may determine where he ends up. Tottenham, Southampton, Newcastle and Leicester have all been linked with moves for the England under-21 international, who began his career at boyhood club Saints before being released.

Zaha joined Manchester United on the crest of a wave in summer 2013 after dragging Crystal Palace to the Premier League, and big things were expected of the Eagles’ academy graduate. Yet things couldn’t have gone much worse for Zaha since his move up north.

The £15 million man didn't feature in David Moyes’s plans, making just four appearances before being loaned to Cardiff in the second half of the campaign. Zaha did play up front for United in their summer tour of the States, but with Van Gaal spending big on Angel Di Maria, the England international has found himself back where it all began. With Yannick Bolasie now on Africa Cup of Nations duty, Zaha will need to step up under Alan Pardew if he is ever to return to United. Helping his boyhood club to safety would be a good start.

Lallana wasn’t meant as a direct replacement for Liverpool’s departed figurehead Luis Suarez, but it was thought that among a raft of other signings, the Southampton man might be able to help Liverpool consolidate their place in the top four. Instead the Reds have crashed out of the Champions League group stages and lie eighth in the league, seven points off Lallana’s old club Southampton.

Lallana, weighed down by a hefty £25 million price tag, has been a symbol of Liverpool’s decline. There have been some promising signs, including a brace in the recent 4-1 win over Swansea, but he has too often found himself on the bench and unable to remedy Liverpool’s inconsistencies. He now faces a month on the sidelines, and will have to hit the ground running upon his return if the Reds are to reach Europe again next season.

Much like Zaha, an awful lot was expected of Powell when he signed for United from Crewe under Sir Alex Ferguson. Like the former, things haven’t gone exactly to plan – much worse, in fact. The saving grace for both is that they have time on their side. Powell is still only 20 and perhaps deserves a little bit of leeway.

His loan move to Wigan Athletic last season was a relative success, after finishing as the Latics' joint-top scorer in the league with seven goals. A loan to newly-promoted Leicester was viewed as progression, but after just three substitute appearances he has returned to Old Trafford, with reports suggesting that Nigel Pearson & Co. were unamused by the youngster's attitude to training. It's time for the former Railwayman to buckle down.

Shelvey has the attributes to make an excellent central midfielder. He boasts a ferocious shot, and his clever passing brings an extra dimension to a Swansea side that often like to play on the safe side. His strengths are similar to Steven Gerrard’s, but it is his indiscipline that has perhaps prevented him from becoming the Liverpool legend’s heir apparent.

This season Shelvey has picked up seven yellow cards and one red, as well as a four-match suspension for an elbow on Emre Can. Boss Garry Monk had previously warned the ex-Liverpool man about his laziness publicly, while Jamie Carragher was quick to mention how moments of indiscipline were not uncommon at Melwood. The 22-year-old must rein in his intemperate outbursts if he's to fulfil his potential.

There is no doubt that Lamela has improved under Mauricio Pochettinho at White Hart Lane, yet you still feel that there is a lot more to come from the Argentine.

Lamela’s first season was a trying one. He was signed for £30 million in the hope that he might fill the void left by Gareth Bale's departure, yet he endured a tough start to life in the Premier League under Andre Villas-Boas. Under Tim Sherwood he didn’t feature at all due to injury, meaning this season was very much a new beginning for the former Roma star. A stunning left-footed strike against Burnley during the Christmas period is hopefully a sign of things to come, but it's clear that Lamela still has work to do to win over the Spurs faithful for the remainder of the campaign.

Out of all Chelsea’s attacking players, Schurrle probably had the best World Cup. Although he was largely a substitute under Joachim Low in Brazil, Schurrle was excellent off the bench, scoring twice in the demolition of Brazil and assisting the winner for Mario Gotze in the final at the Maracana.

The former Bayer Leverkusen man has not had the same impact at Stamford Bridge this season, and that is where he has spent most of his time behind Eden Hazard, Oscar and Willian.

Schurrle was on the scoresheet at Manchester City back in September, but turned villain in the same match when he allowed James Milner to drift off him and set up Frank Lampard for a late City equaliser. Since then he has made just two Premier league starts, and at 24 it is make or break time. Either he forces his way past Oscar and Willian in the starting line-up, or the likelihood is he will follow Juan Mata and Kevin De Bruyne out the door. Wolfsburg have been linked with a £23 million move this week.

You can be forgiven for not knowing much about Brown Ideye. The Nigeria international is West Brom's record signing after joining from Dynamo Kiev for £10 million in the summer, but has started just five times in the league, scoring once.

Alan Irvine, recently sacked, admitted that he had never seen the striker play upon his arrival. After visa problems and injuries, Ideye will be hoping for a fresh start under Tony Pulis, and his powerful style of play may suit the new boss. Either way, the 26-year-old must make a quick impression in 2015 if he is to avoid being cast as true a flop. With Saido Berahino consistently linked with a move away, he may find ample opportunity to prove his worth.