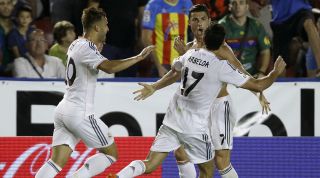 It's as you were at the top of the table after Barça, Atlético Madrid, Villarreal and Real Madrid all picked up wins.

One of those sides, however, must have been sacrificing a few goats of late, such are the favours they are being granted by the footballing gods...

1) Barcelona are learning to live without Leo Messi

Celtic were dispatched without much fuss in the Champions League, and most importantly without Leo Messi pottering about the Scots' backline. And, as the Catalans returned to league action, so were Valladolid. The Pucela side were always going to find themselves on the end of a hiding to nothing, but did at least show some resistance by pulling Barça up on their familiar failings – set-pieces.

However, a truly unselfish Neymar and reborn Alexis Sánchez kept Barcelona ticking along nicely to leave Tata Martino’s side just two victories away from the best league start by any side in La Liga history. “Barcelona are resolving the absence of Messi without any dramas,” writes a pleased Santi Nolla in Mundo Deportivo.

Remarkable motivator Diego Simeone is seemingly master of making his sure his side discards every recent game as mere history, and instead encouraging them to look forwards.

This is perhaps the secret to Atlético’s success, a team that has now won all 10 league and Champions League clashes so far this season. The Rojiblancos are not looking at the title race, nor breaking records, but simply the next 90 minutes of football before the next, and the next. “Every match is a final,” revealed Arda Turan, ahead of Sunday’s 2-1 win in the Vicente Calderón against Celta Vigo. “It’s our style, the style of Cholo.”

3) Real Madrid are the jammiest side in La Liga

Madridistas still feeling the doom and gloom of the season's start may not agree, but Real Madrid are by far the luckiest side in Spain. Blessings should be counted. On their travels they've been battered by Villarreal, won a massively soft penalty to beat Elche and relied on an oh-so-spawny deflection to beat Levante in the dying seconds.

By the blog’s iffy calculations they should have at least five points fewer than they currently do, giving Carlo Ancelotti’s men about as much chance of winning La Liga as Osasuna.

Aside from a desperate late burst of activity, Real Madrid were predictably flaccid, clueless and lame for much of the 3-2 win against Levante. Shots of Florentino Pérez at a basketball game following the match by text were very telling. “Madrid are not shining, nor have the same energy as two years ago, nor the play that Ancelotti is hoping for,” notes AS editor, Alfredo Relaño. All true, but it could be a heck of a lot worse.

4) Villarreal are made of strong stuff

Defeat at Betis last week could have dragged the Yellow Submarine down after a marvellous start to the season. But a more familiar, all-torpedo-tubes-armed-and-ready performance against Granada in Friday’s 3-0 win leaves Villarreal in fourth on 17 points, almost halfway to their initial target this season of staying up.

“Never in my dreams could I have imagined a start like this,” weeped manager Marcelino, after sitting in the stands following last week’s sending off.

And that's why, behind that ever-beaming smile, Luis García is usually hopping mad about his Getafe side. If the Madrid outfit were only good enough for mid-table 'meh-ness', then the Getafe boss probably wouldn’t be that exasperated. It’s just that they're more than capable of getting results when necessary.

Sunday’s 3-1 win over Betis lifted them into fifth, just a few weeks after the club were plodding around the relegation zone with just a single victory in five. “For the time being let’s enjoy the moment, as before we were down and out,” commented García on Getafe’s current run of three wins in a row.

6) Sevilla are still playing with fire

Sevilla supporters can be a patient bunch, but even the most loyal of them would have been tested to snapping point had the 1-1 scoreline going into injury time against Almería remained the same at the final whistle. Fortunately for the Sánchez Pizjuán massif, the seriously useful Ivan Rakitic popped up with a last-gasp header to win the match.

“These are three very important points in a game where you have to take a very tired team into context,” said Unai Emery after Sunday’s game, reminding the gathered media of a parallel Europa League campaign for the club.

7) Málaga are still a work in progress

Although the club is doing better than LLL expected with a fairly stripped-down squad under Bernd Schuster, there's still many a tweak needed, as Friday’s rather surprising home defeat to Osasuna proved.

However, Schuster was more concerned with cruisin’ to an officialdom bruisin’ by arguing that his team should have been awarded a penalty for a handball. “Clearly they are not going to send the best referee to the Málaga vs Osasuna game,” claimed the moody mustached one.

Oh dear. It’s such a shame to see La Real struggling this season after a fantastic campaign last year. All the swagger and confidence has been knocked out of the side with each setback. The Basque outfit probably should have got the better of Rayo in Vallecas, but missed some chances that would have been put away a few months ago.

“We are competing, we are keeping going until the end of games and I think the break coming up will be good for recharging our batteries,” said manager Jagoba Arrasate, trying to see the positive side of Sociedad’s current plight.

The former Sevilla, Deportivo, Athletic Bilbao and Mallorca boss has still got that demon magic. The Levante manager, clad in jeans and shirt, strode to his bench ahead of kick-off against Real Madrid, knowing his team were going to be the icky, hairy blockage in Carlo Ancelotti’s plug hole.

Although the eventual 3-2 defeat and the manner of the loss would have been hugely disappointing, Tomás Roncero writing in AS was quite right when enthusing over a club that has “the annual budget of Kaká on his end of month shopping in Milan.”

The international break would have been a bleak experience if Rayo hadn't picked up a late, immensely soft penalty in the final minutes against Real Sociedad.

The Madrid side had only won their first game of the season and been battered from pillar to post in the meantime. Still, there was a clip round the ear for the Rayo penalty winner and goalscorer, Jonathan Viera. “He’s lightyears away from where he needs to be,” sighed Rayo boss Paco Jémez.