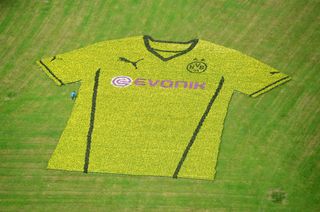 Cologne have reason to look to the seventies with rose-tinted specs: they haven’t won the Bundesliga since 1978. So little wonder their 2013/14 launch got nostalgic, with the ad featuring three men clad like the 118-118 berks in mullet wigs and moustaches, disco dancing and driving a furry dice-filled Ford Mustang. The kit’s as groovy as a Shaft bassline, too.

We never need an excuse to watch naked Nordics launch paint over each other, but Icelandic minnows Tindastoll’s attempt to ape Chelsea’s colour-splattering 2013/14 kit launch with their own low-budget version is distressing: the results resemble a mash-up of a Noel’s House Party “gunging” and a huge pigeon loosening its bowels onto the players’ ungrateful faces. Hellish.

Atop a city roof, Porto players are danced onstage by a man wrestling with a 40ft cloth as if he’s experiencing a severe duvet-change malfunction. The players wear habits that make them resemble Star Wars’ Emperor Palpatine, which they whip off like strippers at the world’s worst hen party, revealing the Dragons' 2011 kit, rather than posing pouches. Hulk’s performance was still more convincing than Ewan McGregor’s, mind.

On paper, Bayern Munich’s 2008 launch might have seemed a good idea: lithe dancers in full strip, pulling fierce faces and flicking their hair like Edinson Cavani. In reality, after two minutes of prancing to Sturm und Drang end-of-a-crap-film opera and cradling branded footballs as if they were the very globe itself, the suits in the audience seem deeply confused.

It had to happen: in 2009 a Velez Sarsfield marketing mastermind – quite possibly a #LAD – noticed that men like both football and attractive women in their scanties, and decided to bring the two together at last. Thongs, stockings and acres of tanned flesh resulted: the shameless kit launch equivalent of route one.

A baffling Puma ad for the 2011 Switzerland outfit, in which the invisible man crosses a ball to a second visibility-deprived individual wearing the Swiss strip – who scores a workmanlike header into an empty net before morphing into a moronically whooping Johan Djourou. Explanations via email, please.

Equally eccentric from Puma was the 2012 Italy shirt launch film, which saw Giorgio Chiellini and Gianluigi Buffon gooning likeably while cartoon characters – some wearing centurion helmets – burst out of their new garments, representing years in which the Azzurri won the World Cup.

Lotto’s 2012/13 Genoa kit was a classic, with the Rossoblu halves looking resplendent. But perhaps a professional waterskier thundering into the seaport didn’t show it in its best light. He was drenched, giving the impression he’d just played 90 minutes in a rainy Rochdale cup tie.

More shameless publicity-seeking, this time from Joma, who decided that filming Roberto Solado sitting down in his birthday suit would help sell 2011 Valencia tops. Perhaps the fact that the orange and brown shoulder stripes made the item whiff of Hull City’s notorious tiger strip put them off picturing it completely?

Adidas’s launch ad for the 2009 Confederations Cup Spain strip brimmed with marketing touchstones: percussive pounding, thrilling action, players uttering: “impossible is nothing”. A shame, then, that the three stripes of paint on each cheek – intended as warrior-like – actually made arguably the finest football team in history resemble a litter of tiny kittens. Own goal.

While others have plumbed the depths of tastelessness with their launches, the Germans' 2013/14 effort was unveiled to Titchmarsh-pleasing effect by recreating it in the local park using 80,000 carefully arranged flowers. Brilliantly executed and an inspiring sight – provided you’ve got a helicopter.

The Royals took 'kit launch' quite literally last summer by firing their new home and away strips 128,000 feet into the air. Quite where they ended up after their 211mph journey back to Earth remains to be seen – we can only hope they didn't crash and burn like Reading's play-off hopes last term. Oof.