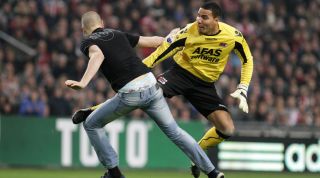 In October 2017’s Europa League clash at Goodison Park, one Toffee couldn't help himself getting involved when a clash started between both sets of players. A brawl developed after Ashley Williams’ rather unnecessary challenge on Lyon goalkeeper Anthony Lopes – and one father in the crowd made his way forward to join in, landing a slap on the French goalkeeper’s face.

What made the incident so outlandish was that while one arm was being used to hit the Lyon player, the other was carrying his toddler son. The man has been banned from Goodison Park for life but defended himself, claiming that the pair were carried to the front by the fans and through a gate which should have been shut. Right.

Perhaps the most shocking moment in Premier League history: Cantona aimed a kung-fu kick at Crystal Palace fan Matthew Simmons after he allegedly told the Manchester United man to "f*** off back to France".

Cantona had received a red card shortly before the incident for kicking out at Palace defender Richard Shaw, but that misdemeanour paled into insignificance soon after. The unrepentant ex-Leeds man, who later told FourFourTwo that he "should have punched him harder", was hit with a nine-month ban and handed 120 hours of community service.

Former Arsenal goalkeeper Graham Stack was one of four Gunners loaned to Belgian side Beveren for the 2002/03 season – but he was the only one who got into it with opposition fans.

Said supporters were soon regretting their actions, though. After breaking through the gates and making their way onto the pitch, the two Antwerp followers approached Stack and got more than they bargained for, as the loanee knocked one down with a single clean punch. Who says Arsenal lack steel?

Watch Stack discussing the incident in our latest FourFourTwo Film

Referee Robert Dumitru’s decision to award Steaua Bucharest a penalty just before half-time in their Romanian league clash with Petrolul would have unimaginable consequences for Steaua’s Galamaz. As the penalty was set up, a Petrolul fan broke onto the pitch and ran at Galamaz from behind, punching him on the side of the head.

The hefty connection left the defender with a broken cheekbone, with Galamaz's hearing also damaged. His team-mates didn't take kindly to the invader's actions and proceeded to attack the supporter, which brought them two red cards.

"It was a terrifying business which had nothing to do with sport, and can be categorised objectively as an absolute disgrace," said Alex Ferguson of Manchester United's infamous trip to Istanbul to face Galatasaray in 1993. The fan-conquering Schmeichel may not concur.

During the Manchester tie between the two teams, an away supporter entered the field – with a burning flag – in the closing stages of this Champions League encounter, which prompted the United goalkeeper to take action. Schmeichel grabbed the fan and ushered him to the side of the pitch, before spectacularly throwing him over the touchline. Lesson: don’t mess with the Great Dane.

Who'd be a goalkeeper? Not only is there a good chance they'll be punished for their mistakes, a team's custodian is also most vulnerable to attacks from invading supporters.

Shakhtar Donetsk shot-stopper Kanibolotskiy took a preventative course of action when a fan approached him in 2015. Not taking too kindly to having a middle finger thrust in his face, Kanibolotskiy shoved the supporter and grabbed him by the throat, sending his red beanie flying in the process.

In a fiery Yorkshire derby, Leeds' Michael Tonge had just equalised against Sheffield Wednesday when Owls goalkeeper Chris Kirkland was violently shoved in the face by a Leeds supporter. The keeper received treatment on the field for minutes after the incident, which led to the jailing of the 'fan', who claimed to be "so drunk" that he had no memory of the event.

Moving between rival clubs always guarantees unpopularity with at least one set of supporters, but Zahavi probably didn't expect to be physically attacked after joining Maccabi Tel Aviv from neighbours Hapoel.

The Israeli striker was set upon after scoring a penalty, exchanging kicks with the topless fan before team-mates and opponents intervened. Ten minutes after Zahavi was sent off for his actions, further crowd trouble forced the referee to abandon the match.

Norway's No.1 took matters into his own hands when a rogue fan entered the field during an international fixture against Spain in 2003. The goalkeeper showed a quick turn of pace when chasing the unwelcome visitor, before flying into tackle that'd make Vinnie Jones wince.

As the supporter tumbled over, losing a shoe in the process, Olsen again reacted quickly to pin him down and wait for assistance. Nice work all round.

With 36 minutes played in AZ Alkmaar’s KNVB Cup match against Ajax, goalkeeper Alvarado was approached by an Ajax fan who appeared intent on attacking the 22-year-old shot-stopper. The fan and Alvarado jump-kicked each other, before the latter gained the upper hand and began treating the stricken supporter's body like a football.

The AZ Alkmaar man was duly sent off, which led to manager Gertjan Verbeek ordering his players into the dressing room in protest. The referee had no choice but to abandon the game.

When player-manager Vickers was forced to play for Dorchester Town amid an injury crisis, he could hardly have envisaged how his evening would end. When a pitch invader wearing nothing but a Borat-style mankini continued to evade the stewards' attempted tackles, Vickers caught up with the fan and wrestled him to the ground. And what thanks did he get? A red card from the referee.

Strachan won three league titles and three domestic cup competitions during his time as Celtic manager, but he wasn't always so popular with the club's supporters.

Indeed, the former Scotland boss was once targeted by a Bhoys follower during his playing days, the fan in question taking exception to Strachan's expertly converted penalty for Aberdeen in 1981. The Celtic supporter didn't get close enough to the celebrating midfielder, though, and was quickly hauled off by two police officers.

10 of football's most spectacular (and often awful) debuts

The 16 most hilarious football club names from around the world