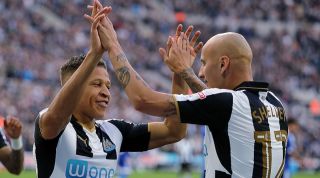 Brighton’s vice-captain has been central to his team's defensive sturdiness this season, as the Seagulls tussle with Newcastle for top spot. Whether or not Chris Hughton's men get over the line in their bid for promotion, it's probable that Dunk's first dose of Premier League football will come next term.

Now 25, the confident central defender has hitherto stayed true to his boyhood club's ambitions, with Brighton insisting both last summer and in January that all bids for Dunk would be rejected. If the south coast side once again fall short this year, it's hard to see how they'll be able to keep hold of the 6ft 4in stopper.

Mooy was the first signing of the Pep Guardiola era at Manchester City, which was in itself a sign that he has something special. His performances this season have proved that to be the case, with the Australian having been integral to Huddersfield’s promotion push from the start.

A bow-legged, flowing central midfielder, the Socceroo glides through opposition lines with apparent ease. He contributes defensively too, and is a proficient tackler, passer and all-purpose mover of the ball. A return to City might not be a realistic move, but Mooy will surely be plying his trade in the top tier regardless of what happens to Huddersfield between now and May.

Fifteen years ago, a transfer from Swansea to Newcastle would have marked clear professional development, but Shelvey effectively took a step down when he joined the Championship-bound Magpies last January.

Still only 24, a year in England’s second tier could turn out to be an vital educative exercise for the ex-Liverpool man, who'll be all the better for his time out of the spotlight when he returns to the Premier League. Shelvey is arguably the most talented player in the Championship – which means he's unlikely to be there for much longer.

Gayle has already plundered 20 goals for Newcastle this term, with the former Crystal Palace and Peterborough frontman averaging one every 88 minutes. The question remains, though: can he do it in the Premier League?

Gayle impressed in bursts at Palace but ultimately struggled to nail down a regular first-team role, and he departed Selhurst Park with just 15 league goals to his name in three years. Quick, agile and lethal inside the penalty area, the 26-year-old has surely done enough to warrant a shot at being Newcastle's line-leader next season.

Rarely has a Leeds signing turned out so well, particularly in the Massimo Cellino era. Originally a loanee from Torino, the imperious Swede has stood firm in the heart of a defence which has conceded just 33 goals in 32 games under Garry Monk.

Already a cult hero, Jansson is said to have been on the verge of retring before Leeds came calling. Seldom do you see such a quickly-forged connection between player and supporters, but the centre-back – who began his career at Malmo as a striker – probably wouldn't let sentimentality get in the way if he had the chance to move to the top flight.

Despite helping Watford to promotion in 2014/15, Forestieri wasn't considered good enough for the Premier League by the Hornets. Though a favourite under former manager Slavisa Jokanovic, Quique Sanchez Flores wasn't so hot for him and the striker was duly sold to Sheffield Wednesday at the beginning of last season.

The Argentina-born Italian was the Owls’ top scorer with 15 goals as they reached the play-off final, but Forestieri was again denied his top-flight chance – this time by Hull City. As Wednesday fight for promotion once more, Forestieri will be desperate to go one better and realise his Premier League dream.

The son of Paul couldn’t be more different in style to his dad: a dexterous dribble and neat finisher, Ince Jr. has already scored 11 times this season, including some vital winners which jump-started Steve McClaren's second stint with the Rams.

The forward was linked with Inter, Ajax, Monaco and Liverpool in 2014 (so he chose Hull, of course), but his career has stalled somewhat since. After a miserable spell at the KC Stadium he was revitalised during a loan spell with Derby, and now looks ready to return to the Premier League. Long gone are the days of comparisons to his dad's success and excessive media attention; now, people are judging Ince on his own terms.

Football in 2017 is full of relationships between clubs you'd never have expected. Since Jeff Shi’s takeover at Wolves, for instance, agent Jorge Mendes has been at the heart of movements between Portuguese giants Benfica and the Black Country outfit: ex-Eagles Silvio, Ivan Cavaleiro, Joao Teixeira and Costa have all pitched up at Molineux.

Wolves splashed £13m to make a loan deal permanent for Costa, who ran rings around the Liverpool backline in the FA Cup fourth round last month, but the club have to brace themselves for bids in the summer. A nimble mover and excellent crosser who can play anywhere across the attacking line, the 23-year-old has no doubt already attracted the serious interest of top-division scouts.

Knockaert’s return to English football has been a welcome surprise for Seagulls fans. Having briefly dropped off the radar in England with a successful post-Leicester stint at Standard Liege, the Frenchman – who's still only 25 – has 10 goals and seven league assists to his name this term.

Shunned by Nigel Pearson following the Foxes' promotion to the Premier League, Knockaert will hope his fate is different if Brighton go on to secure a top-two finish. Stylistically similar to Riyad Mahrez, he certainly has the talent to play at the highest level.

There's been plenty of drama and mediocrity at Villa Park this term, but Kodjia's simply got on with the task in hand: scoring goals. The Ivorian has found the net 11 times since joining the Midlanders from Bristol City, hitting back at the critics who scoffed at the £15m price tag.

Not everything's been plain sailing, though: Kodjia can be greedy in the final third and club legend Paul McGrath recently described his work rate as "nil". If he can continue scoring goals while also adding a bit more running to his repertoire, there'll be plenty of interest from the Premier League in the coming months.

Ritchie swapped the Premier League security of Bournemouth to join relegated Newcastle in the summer, much to the surprise of many. That said, the potential of the latter club reaches beyond that of Eddie Howe’s side, and the winger's decision has since been justified. The Magpies are surely on their way back to the Premier League, meaning this top-flight talent is also set to return to his rightful home.

How YouTube changed football: the seismic shift of a global phenomenon

Henrik Larsson, One-on-One: "The only regret of my career? Spending just two months at Man United"

Quiz! How many Football League clubs' nicknames can you recall?

Oh, the life of a loanee. Currently owned by Premier League Leicester but formerly of Manchester United, Lawrence has proved a useful hand-me-down for six lower-tier sides since the start of 2013, travelling the lengths of the country – from Carlisle to Yeovil – in search of first-team football.

Currently on loan at Ipswich, the former United youth-teamer has proved a shining light in an otherwise dim season for the Suffolk side. Lawrence has been directtly involved in 15 goals in all competitions (10 goals, five assists) and may finally be ready for regular action in the Premier League. Will that be with Leicester, though?