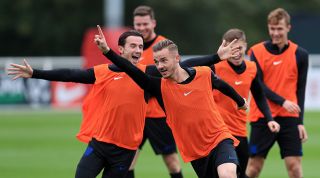 Maddison has made a seamless step up from Championship to Premier League, establishing himself as one of the first names on Claude Puel’s teamsheet after just four top-flight outings. The attacking midfielder possesses wonderful technical ability and excels at both creating and converting chances, as demonstrated by his return of 14 goals and eight assists for Norwich last term.

There’s no room for a true No.10 in Gareth Southgate’s 3-5-2 formation, but Maddison could play in a slightly deeper midfield role if the England boss sticks with the same setup he used at the World Cup.

Sessegnon was an outside bet for England’s 23-man World Cup squad, but Southgate sensibly opted against including the then-17-year-old in his travelling party. The Fulham wideman hadn’t even played a Premier League game at that point, but the Cottagers’ promotion through the play-offs means he now has a stage befitting his prodigious talent.

Now 18, Sessegnon plays with a maturity belying his tender years and would no doubt take the transition to international football in his stride. He’s versatile too, capable of playing in any number of roles on the left flank or even as an inverted winger on the right.

With Bundesliga clubs more willing to blood youngsters in the first team than their Premier League counterparts, it’s no surprise that an increasing number of young English players are making the move over to Germany.

Sancho is the best example of a teenage talent who’s thrived overseas, having made 13 Bundesliga appearances for Borussia Dortmund since leaving Manchester City in summer 2017. A world champion with England’s under-17s, the London-born forward can’t be too far away from a first call-up at senior level. Southgate will certainly be keeping a close eye on him.

Everton agreed loan deals for Kurt Zouma and Yerry Mina at the end of the summer transfer window, but Marco Silva has hitherto stuck with the centre-backs he inherited. Holgate began the opening-day draw with Wolves on the bench, but he’s started the Toffees’ last two Premier League matches and looks set to keep his place in the starting XI for the foreseeable future.

Young, adaptable (he can also play at right-back) and comfortable with the ball at his feet, Holgate ticks many of the boxes Southgate has based his selection policy on since taking charge in 2016.

Potentially, one for security at this point: Wan-Bissaka is also eligible for DR Congo, so England may look to tie him up sooner rather than later. But despite being sent off against Liverpool and therefore missing the 2-1 loss to Watford through suspension, the 20-year-old was voted Palace’s player of the month for August. A call-up to England's under-21 squad has been his reward.

The tough-tackling right-back has picked up where he left off last season, when he grasped his opportunity with both hands after an injury crisis saw the Eagles academy product forced into action in February. Wan-Bissaka faces stiff competition from Kieran Trippier, Trent Alexander-Arnold and Nathaniel Clyne, though, and his task will be made even harder if Kyle Walker returns to his natural position.

Voted player of the tournament when England won the Under-17 World Cup last year, it is a matter of when rather than if Foden receives his first full international cap. The Manchester City man is expected to receive more game time under Pep Guardiola this term, although he’s still awaiting his first start in the Premier League.

Foden is an incredibly gifted youngster who’s already been awarded the moniker of ‘Stockport Iniesta’, and could be an England mainstay for years to come. It would be a major surprise if he wasn’t included in one of Southgate’s squads before the end of 2018.

Gray has had to remain patient for regular minutes since joining Leicester midway through their title-winning campaign of 2015/16, but Riyad Mahrez’s departure in the summer means he will almost certainly improve upon his 17 Premier League starts last term. He’s already off the mark for the season too, having scored the equaliser as Leicester came from behind to beat Southampton 2-1.

The former Birmingham winger netted six goals in 18 games for England Under-21s and now looks more ready than ever to step up to the senior squad.

Grealish’s international future was a hot topic a couple of years ago – the Aston Villa playmaker is eligible for both England and the Republic of Ireland. He ultimately pledged his allegiance to the Three Lions and the country of his birth, but a series of off-field misdemeanours checked his progress as the Villans dropped out of the top flight.

Grealish was back to his very best last season, though, and he could soon join the exclusive club of England internationals who won their first cap while playing in the second tier. The 22-year-old came close to joining Tottenham in the summer, and Southgate will know it’s only a matter of time before he returns to the Premier League – with or without Villa.

Wilson has made a terrific start to the Premier League season, scoring two goals in his first four appearances for unbeaten Bournemouth. The former Coventry marksman has bounced back brilliantly from two separate knee ligament injuries since the Cherries’ promotion to the top flight, scoring eight league goals in 2017/18 and establishing himself as Eddie Howe’s first-choice No.9.

With Jamie Vardy having stepped back from the international scene, there’s a place up for grabs behind Harry Kane in the centre-forward pecking order – and Southgate is hardly swamped with attractive options. If Wilson keeps finding the net for Bournemouth, he’ll surely get a chance to show what he can do.

Luke Shaw has earned himself a recall to the England setup after a promising start to the season, with Ashley Young clearly not the future at left-back. Leicester's Chilwell, having relegated title-winning hero Christian Fuchs to the bench at the King Power Stadium, will hope his performances for Leicester haven’t gone unnoticed.

A thoroughly modern full-back who regularly makes eye-catching bursts down the flanks, the Foxes youth product would be a perfect fit for a wing-back berth if Southgate sticks with the three-man defence that served England so well in Russia. His start to the season has been exceptional.

McCarthy found himself out of the Southampton team this time last year, but he’s now firmly established as Mark Hughes’ No.1 and has seen his fine recent form rewarded with an England call-up for the upcoming meetings with Spain and Switzerland.

The 28-year-old remains behind Jordan Pickford and, in all likelihood, Jack Butland at present, but Southgate may hand him his first cap in next month’s friendly against the Swiss – particularly as Stoke’s Butland is now plying his trade in the Championship.

Mawson was always unlikely to follow Swansea down to the Championship when the Welsh outfit lost their place in the Premier League last season, and Fulham won the battle for the centre-back’s signature.

The 24-year-old didn’t get on the pitch despite being included in Southgate’s squad for the friendlies against the Netherlands and Italy in March, but the England boss should be more open to handing out debuts now there’s no longer a major tournament on the horizon – which is good news for Mawson and the other 11 hopefuls listed here.

Now you're done, why not try this? Quiz! Can you name all 49 England players to earn a cap under Gareth Southgate?