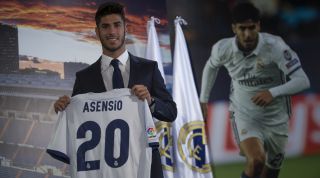 After growing in stature at Lyon over the past few seasons and then enjoying an assured Euro 2016 with France, Umtiti looks ready to force his way into Barcelona's backline. The Catalans have been craving a centre-back with his qualities for a while now: the 22-year-old possesses ample physical and technical gifts, is blessed with pace and power, is agile and able to help build moves from the back.

While Umtiti is one for the future, he's also likely to receive a fair bit of game time this term. His ability to play at left-back as well as centre-half only increases the chances of him being called into action by Luis Enrique in his debut campaign.

‘Magic Marco’ has defied those who felt he wasn't ready for the big time this summer, proving to be the sensation of Real Madrid's pre-season. His stunning strike against Sevilla in the UEFA Super Cup emphasised not only the talent of the boy from Mallorca, but his confidence and self-belief too.

Asensio's matured well since making the breakthrough at his hometown club in 2013, with an impressive loan spell at Espanyol last season convincing Zinedine Zidane and Madrid that he's ready to challenge for a first-team place at the Bernabeu.

A gifted attacking midfielder who can play anywhere across the forward line, Asensio will bring variety to the Real Madrid attack with his ability to run with the ball, take on defenders and play intelligent passes. There'll be challenges along the way, but the 20-year-old looks well equipped to take it all in his stride.

Correa sought a loan move away from Atletico Madrid this summer, but Diego Simeone persuaded him to stay. Described by senior Atleti players as having the most unique skill set in the squad, the young Argentine could well take the 2016/17 season by storm.

Correa boasts a brilliant touch and can run effortlessly with the ball, but his end product has let him down up to now. If he can add that element to his game – and it will surely come with more minutes and confidence – the 21-year-old has the potential to light up La Liga and give Atletico a different dimension when they're trying to break down deep-lying defences.

Unlike Correa, Atleti opted to loan out Kranevitter in a bid to get him some more regular football in a competitive environment. Sevilla looks the ideal place for the 22-year-old too, with countryman Jorge Sampaoli in the dugout and a raft of South American signings made this summer.

Given that Ever Banega and Grzegorz Krychowiak have departed the Ramon Sanchez Pizjuan, Sevilla are in need of a commanding figure in the centre of the park. Kranevitter is perfect for the role: a tough tackler who's excellent at regaining possession, the former River Plate man can also dictate games from deep and push forward to support the attack. Atletico and Simeone will be watching closely.

Kranevitter is a master ball-winner

After his breakout season last time out, Williams will be looking to make an even bigger impact this term. He's already become essential to Athletic's forward line, with his ability to run at opponents with speed unmatched by anyone else in the Basque club's ranks.

Williams has a brilliant attitude when in possession. He constantly looks to drive into the penalty area and make things happen, and his eye for a goal is evidenced by the eight league strikes he managed in 2015/16.

He'll need to weigh in with even more goals this year, with 35-year-old Aritz Aduriz unlikely to match his incredible haul of 36 in all competitions last season. Williams is far than just a poacher, though, and he'll be relied upon to connect the midfield and attack once more.

After an unpredictable and turbulent summer at Villarreal, youngster Castillejo will be relied upon to step up this term. Signed from Malaga a year ago, the 21-year-old has had some brilliant moments but must now become a more consistent threat in the Yellow Submarine's forward line.

Castillejo has far more ability than a measly return of one goal and one assist last season suggests, and he'll be determined to improve in that regard in the coming months. There's no doubting his talent, though, and he's adept at the defensive side of the game too – something that's not always associated with young wingers.

The three phases of Arsene: How Wenger's approach to transfers has changed down the years

A Valencia fire sale may be going on around him, but Mina is primed to be a leading light for los Che this season. Acquired last summer from Celta Vigo, the young forward made a great deal of personal progress despite the club's struggles, with his goals late in the campaign keeping Valencia safely above the relegation zone.

Mina's been used most in a wide role, although he can also play centrally. When deployed on the flank, he regularly uses his speed and trickery to beat defenders and cut inside with the ball, while his non-stop running sets the tone for this team-mates around him.

The former Celta Vigo man could well lead the line this term, although it wouldn't be surprising to see him play in a number of different positions. It’s easy to see why Jorge Mendes was so keen to add the player to his list of clients – a huge financial return can't be too far off.