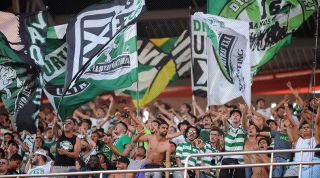 Last week, Fabio Quagliarella equalled Gabriel Batistuta's record by scoring in an 11th consecutive Serie A game. On Thursday, the Sampdoria veteran celebrates his 35th birthday, which makes the achievement even more special – very few players have been so prolific at such an age. And on Saturday he travels to Napoli, hoping to find the net and overtake the legendary Argentine striker to stand alone at the top all.

It may sound surprising, but Napoli fans will support him in that quest.

Naturally, the Partenopei need the three points – but they would prefer not to win to nil for a change. Born in the area, Quagliarella is a local hero and a fervent Napoli fan himself. His dream of joining his beloved team came true in 2009, but it quickly became a nightmare as the striker's life was ruined by a stalker.

Forced to leave the city and move to Juventus, Napoli supporters - not knowing the full story - considered him a traitor. Only in 2017, when the villain was convicted in court, could Quagliarella reveal what really happened – and Neopolitan adoration towards him now knows no bounds. He's a hero to them, and it would be terrific if he were to enter the history books at the San Paolo.

Celta to fire another coach?

Celta Vigo have two of the best strikers in La Liga in the magnificent Iago Aspas and rising Uruguayan star Maxi Gomez. The pair have scored a combined 33 goals in 21 matches, which is the fourth-best record in Spain behind Barcelona, Sevilla and Real Madrid. And yet, astonishingly, Celta find themselves in the relegation zone.

Despite playing some good football under Antonio Mohamed at the start of the season, results weren't stable enough for the board's liking and the coach was fired in November. It was a bizarre decision, because the squad liked Mohamed's style.

His replacement, Miguel Cardoso – who was himself fired at Nantes earlier this season – has a totally different philosophy, and the mid-season change has proved to be disastrous. With five defeats in a row, Celta are in serious danger of going down, and Cardoso could be gone if his team lose again on Saturday. Unfortunately for the Portuguese, Celta's opponents are high-flying Sevilla.

On Sunday, David Silva and Unai Emery will be reunited – this time as rivals. It would be an exaggeration to claim that the coach had a crucial influence on the midfielder's career – after all, Silva was already a household name and European champion when Emery arrived at Valencia in summer 2008.

However, the current Arsenal coach certainly helped to improve Silva's overall performances during their two seasons together, and the pair had a good relationship. Emery once told Pep Guardiola that Silva would be a perfect fit for his Barcelona team, but the playmaker was apparently "too expensive" at that time.

Silva instead moved to Manchester City in 2010, and is now in his ninth season at the Etihad. Guardiola's wish to work with Silva eventually came true, but the latter has missed City's previous meetings with Emery-managed sides - he was injured for the Champions League clashes with Sevilla in 2015 and also sat out the 2-0 victory over Arsenal on the opening weekend of 2018/19. Now, at long last, he'll have the chance to take on his former mentor - and he's desperate to beat him, too.

Bundesliga has its Doll back

Once upon a time, Thomas Doll was seen as a rising coaching talent in the Bundesliga. Having finished his magnificent playing career at Hamburg, he was appointed manager of the first team at the age of 38, and led the northern club to third place and Champions League qualification in 2006. However, Doll was fired less than a year later, before moving to a Borussia Dortmund side mired in financial difficulty. He resigned from that job in 2008, paving the way for Jurgen Klopp to take the reins at Signal Iduna Park.

The rest is history, and while Klopp became a superstar his predecessor disappeared from the radar, working in Turkey and Saudi Arabia. He then spent five years in Hungary with Ferencvaros, winning the title in 2016, but his early promise wasn't fulfilled.

Now 52, Doll is back in the Bundesliga with lowly Hannover, tasked with saving the struggling club from relegation following the sacking of Andre Breitenreiter. His debut on Friday is against RB Leipzig, which is amusing for two reasons. Firstly, Doll is East German and was raised at Hansa Rostock, making this something of a personal derby. Secondly, Leipzig were only established in 2009, which means they didn't even exist when Doll last took charge of a Bundesliga match.

Scorching Lisbon derby as hot as ever

Rui Vitoria became the first coach to be fired in 2019 after Benfica scored two clumsy own goals and lost 2-0 to Portimonense at the beginning of January. The situation looked grim for the Eagles back then, but they've since won four matches on the bounce under Bruno Lage and now find themselves just two points behind leaders Porto.

They'll be aiming to keep the momentum going on Sunday, but visiting Lisbon rivals Sporting is never easy. The Lions made a coaching change themselves in November, and Dutchman Marcel Keizer led them to Taça da Liga success over Benfica last week. Sporting can revive their own title hopes with a win.

Lyon looking for revenge over Mbappe

When PSG hosted Lyon in October, Kylian Mbappe enjoyed one of the best matches of his career, scoring four goals in 13 second-half minutes as the champions won 5-0. The visitors to Parc des Princes played well early on and were boosted when Presnel Kimpembe was sent off, but they collapsed after Lucas Tousart was also given his marching orders.

With Neymar injured and Thomas Tuchel already thinking about facing Manchester United in the Champions League, could sweet revenge be on the cards? Lyon beat PSG last term and will be full of confidence after their dramatic win against Saint-Etienne in last week's derby. Then again, Mbappe is likely to have his own plans...

Fortuna Sittard have been a very pleasant surpise in the Eredivisie this season. Sensationally promoted against the odds last term, they're now sitting pretty in mid-table - and PSV coach Mark van Bommel is delighed for them. The former Holland captain spent seven years at Fortuna between 1992 and 1999, and is still a big fan of the club.

His return to Sittard in August was emotional, with PSV winning thanks to an injury-time goal. Van Bommel would love to keep his perfect home record intact on Sunday, but he knows that Fortuna are dangerous opponents.

It's been the worst Anderlecht season in decades. The Brussels giants have been disastrous on all fronts, so much so that it's hard to work out which part of their campaign has been more shameful: finishing bottom of a fairly easy group in the Europa League after failing to win any of their six matches against Fenerbahce, Dinamo Zagreb and Spartak Trnava, or falling 14 points behind leaders Genk in the Belgian First Division.

Anderlecht sit fifth and have already suffered seven away defeats, including four in a row stretching back to November. Fred Rutten has recently replaced Hein Vanhaezebrouck as coach, but the fans are pessimistic. On Sunday, Anderlecht visit bitter rivals Standard Liege. Could it be an unlikely turning point?