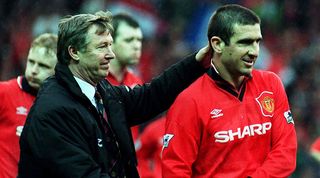 25th ANNIVERSARY: MORE ON THE KICK

Even without speaking or playing, Eric Cantona still got into trouble. In late July 1995, Alex Ferguson told Cantona that Manchester United had arranged a series of friendlies against Oldham Athletic, Rochdale and Bury. Cantona was banned from playing in organised games, but within the context of training, United believed the plan to be permissible.

The first game was against Rochdale, but the media got wind of it and widely reported that Cantona and United might well be in breach of the ban. FA spokesman Mike Parry confirmed on July 30 that the governing body would be investigating the incident and had written to United for clarification.

“The ban imposed on Eric Cantona said that he should be suspended from all football activities until the beginning of October,” said Parry. “So we assume Manchester United have a plausible explanation. We’d just like to know what it is, to clear the matter up.”

Eventually, the FA sheepishly retreated from their position. “We are entirely satisfied with their [Manchester United’s] explanation and we have conveyed that to the club,” a statement read.

But the damage had already been done. Angered by the FA’s reaction, Cantona travelled to France and holed out there, communicating only through his agent, who had threatened that his client would refuse to come back to Manchester if the FA didn’t drop their threat of further investigation. If that statement scoped the FA’s reaction, it was supplemented by a faxed transfer request to United.

“Eric was very upset at the recent inquiry by the FA concerning his involvement in the training session of 25 July,” stated Manchester United’s press officer Ken Ramsden. “He told Martin Edwards that he felt he had very little future in the English game and that his career would be best served by a move abroad.”

Cantona’s outburst might seem a little petty in hindsight, but his concerns about a tarnished reputation were valid. He had already been dogged by his blotted copybook during his final years in French football and feared that the same would happen in England. With a highly lucrative offer from Inter still on the table, Cantona believed another fresh start might be the answer. Ferguson agreed.

“Eric feels persecuted by the FA inquiry and it seems like the final straw to him,” said a despondent Ferguson. “Obviously we don’t want to lose him. We just have to hope that things settle down.”

In fact, it took a great deal more from Ferguson to save the day. Spurred on by his wife Cathy, he travelled to Paris as he grew increasingly concerned that the situation was a lost cause. Thus began the farcical saga of Ferguson in France, tracking down Cantona.

Ferguson flew into Charles de Gaulle Airport and dodged the gaggle of journalists waiting for him at arrivals. He jumped into a taxi and was taken to the Hotel George V in the city centre, where he would stay. In his room, Ferguson received a call from Jean-Jacques Amorfini, Cantona’s lawyer and vice-chairman of the French PFA. He told Ferguson that a porter would collect him at 19:30 and bring him to Amorfini.

If this already had the feel of a low-budget, arthouse spy film, Ferguson’s description of the porter telling him to ‘Follow, Monsieur Ferguson’ completes the image.

When Ferguson finally met Amorfini, having been led through the hotel’s myriad corridors, the lawyer was sitting astride a Harley-Davidson motorbike and had a spare crash helmet for Ferguson to wear. The United manager clambered onto the bike behind Amorfini and then rode through the side streets of Paris to a small restaurant with a ‘closed’ sign attached to the door.

Ferguson had formulated his plan of attack on the plane from Heathrow. He stressed to Cantona that the FA’s investigation – which had by now been dropped – wasn’t an attack on the individual but on Manchester United’s decision to organise the friendlies without the prior say-so of the governing body. Moreover, he would be permitted to play in a number of other matches before his return. He told Cantona how Maurice Watkins, the club’s lawyer, had fought vehemently on the Frenchman’s behalf.

More importantly, public opinion in England had shifted since news of the investigation had filtered through. Supporters – and not just of Manchester United – believed that having almost completed his ban and served his community service by helping hundreds of children in the local area, Cantona had demonstrated his love for the game and proved his power as an inspirational figure to young fans.

Finally, Ferguson told Cantona just how important he believed he would be to United upon his return. Having sold three senior players and replaced none of them, the Scot had a vision of a new Manchester United. Young players would be given ample opportunities in the first team, and Cantona would be their role model. His professionalism, work rate and on-pitch brilliance would ensure as much.

This passage is an edited extract from 250 days: Cantona’s Kung Fu and the Making of Manchester United by Daniel Storey

COMMENT The paradox of success: why do we think quick success is only delivered by short-term managers?