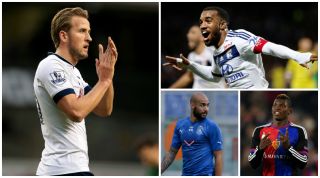 With 18 games left to play in this most unpredictable of Premier League campaigns, Tottenham find themselves just six points behind league leaders Arsenal and three behind the well-backed Manchester City.

As evident by the fact Mauricio Pochettino’s side have lost only two matches and conceded just 16 league goals – the best defensive record in the division – this current Spurs team possess the steel and solidity that they’ve been accused of lacking for years. Therefore, they must be considered as genuine contenders (but whisper it quietly).

The biggest issue with the side is their lack of cover up front, however, with Harry Kane the only real option at centre-forward after the departures of Roberto Soldado and Emmanuel Adebayor. If the north Londoners are to keep up their title challenge, greater depth at the top of the pitch is a must.

(Oh, and make sure you don't actually miss the interactive icons on the image below.)