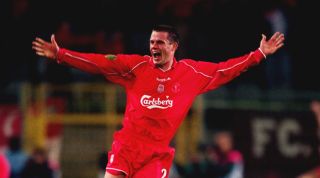 Ahead of our watchalong of the UEFA Cup final of 2001 against Alaves, we spoke to a member of that side - Jamie Carragher. Carragher not only has strong memories of that season, he went onto better the UEFA Cup by lifting the Champions League in Istanbul four years later...

How are you doing in lockdown, Jamie?

Yeah I’ll have another one up on Sunday morning!

Not missing Gary Neville too much?

No, no! I’ve had enough of him on The Football Show on Skype and Zoom, I’m seeing more of him than ever - it’s a couple of times a week at the moment, it was only once a week on Sky. Hopefully, fingers crossed, we all get back to normal.

So who were the ones to watch of that Liverpool team in 2001? Other than yourself of course...

[Laughs] Well I think at the time, the big decision for the manager [Gerard Houllier] was who was gonna play up front. So you know, we had Michael Owen, [Emile] Heskey and Robbie Fowler. Michael and Emile were his first choice, and he played them together in the FA Cup final against Arsenal.

He went with the same front two a few days later in Dortmund against Alaves, even though Emile didn’t play particularly well in the FA Cup final and Robbie ended up coming on.

Michael Owen in the second half of that season, that was his right to win the Ballon d’Or. I think Stevie Gerrard as well - obviously he wasn’t the player then that he went on to be, but he scored in that final.

I think that team, the front six - everybody chipped in. We didn’t have a go-to player I think, not like Stevie was maybe five years later. Because we had those five strikers, and we had Jari Litmanen. In the midfield, we had [Patrick] Berger, [Vladimir] Smicer, [Nick] Barmby, [Danny] Murphy, [Gary] McAllister, Didi Hamaan… it wasn’t like one was better than the rest.

So that’s why we did a lot of rotating. That was the first time that people had heard of some of those players, because we had such a strong squad. I think the squad was more important than the team in 2001. And that’s not something I can say too often in any time at Liverpool.

Is that why you managed to go so far in three competitions, do you think?

Yeah, of course, and it was the Sunday/Thursday [schedule] back then as well. The final was a Wednesday night but I think throughout the season we just played Sundays and Thursdays and just got through it really. Gerard never really changed the back four so I was lucky that I always played - the season was 63 games, I think I played 58. I think Markus Babbel played 59. Again, he was another member of the back four.

Were you not knackered!?

We were at the end! We were running on empty in the UEFA Cup final.

I think we could’ve easily beaten by Alaves four or five considering the start we had in the game, I think we ran out of legs physically, but also mentally - I think we were drained mentally.

You’d just beaten Arsenal 2-1 in the FA Cup final, that must have been one of the busiest weeks of your career?

In the Cup Final, we’d been given the runaround by Arsenal in the heat. We were lucky. Very lucky, it was down to Michael. And also that we had the mentality to keep going, we had a really strong, powerful team mentally as well. We weren’t the greatest on the eye, we weren’t the best footballing team, but we were really strong defensively - and that went out the window with us in cup finals over the years! But we were running on empty in that Alaves game, and you can see it in our performance.

Two or three days later, we went to Charlton… and we won that 4-0. But if you watch that game, we got battered in the first half, they hit the woodwork twice. It was 0-0 at halftime and the strikers just produced the magic in the second half. Four or five games towards the end [of that season], we hit the wall basically, and we just managed to hang on.

Did you think you were going to lose the UEFA Cup final in that second half?

Only a few minutes.

Yeah, that was the killer. It was like “Oh my god.” Because when they got it back to 3-3, that wasn’t a killer because there was still half an hour to go, we were just like… “Come on.” But we knew we were running on empty and that this was the biggest game of their lives. And one of ours of course - it was a European final - but so much had been taken out of us, physically and mentally, especially from the Saturday, and then we go into that game... and you know you’re better than them, we went in front with ease. When they came back, they had the momentum, the energy.

I’ve never thought about it like this, but it was probably something similar to what we did to AC Milan [in 2005]. We held on, we did the opposite of what Milan did - AC Milan knew they were better than us in 2005, and we knew we were better than Alaves in that game. But it was more what the game had taken out of us. And that goal to make it 4-4, so late on. That was a real killer blow. I remember my reaction being to put my head down and none of us had a go at each other, we were just that tired.

Did you start to panic about the next half hour?

There was a fear of going to extra time. It was the golden goal remember. There’s no time to come back.

Write The Future: How one of football's most iconic adverts ever was made

You mention Milan - how did the Champions League final compare as a game to the Alaves game?

There were about six or seven of us that played for Gerard Houllier, played the Champions League and won the FA Cup with Rafa Benitez. That was me, Stevie, Didi Hamaan, Sami Hyppia and maybe a couple of others I’ve missed out. We were all strong mentally, I don’t think it’s a surprise that we won cup finals the way we did, really. We’d just hang on in there and fight to the end. Not just give everything, but just know what to do in certain situations.

There’s a link between that game in Dortmund and that game in Istanbul. That’s the first time I’ve ever thought about it. I just think when Alaves equalised to make it 4-4, there was no doubt that there was a real fear. And to be honest, it was more hope that we’d go on and win the game. We needed something fortunate and it was an own goal from a set piece.

How many of the Class of 2001 would get into Jurgen Klopp’s Liverpool team today?

Errr… I think Sami Hyppia would get in. I was a left-back but Sami Hyppia was a centre-back and he would get in today’s team. Steven Gerrard would get in. Would Michael Owen? Yeah I think Michael would. Michael Owen and Robbie Fowler might get in the team. People talk about balance - Roberto Firmino’s a different type of player but if you’ve got someone like Robbie Fowler or Michael Owen, coming through your ranks and scoring that many goals, they’d get in your team. So I’d say yeah, probably four players at their best. I hope I’ve not missed anyone…

You could make an argument for Markus Babbel, the right-back, he had a good season. I wouldn’t say definitely ahead of Trent [Alexander-Arnold] but I think that one would be a toss-up.

Which was the sweetest trophy of the treble?

At the time, I always thought it was the FA Cup. As a player, you wanted to win the FA Cup more than anything. I think as I look back on my career now, I’m more proud of what we did in Europe. And I do think a European trophy trumps a domestic trophy. Certainly in terms of the cups - I don’t think a UEFA Cup trumps any title but I think the Champions League does.

But winning a European trophy’s special. The build-up to it: the different stadiums, the travel. There’s something special about Europe - that’s what I miss more from my career more than anything, the European games. The home and away, the travel, going to different countries, different cultures and different styles and systems. I probably didn’t realise it as much at the time, but to play a European final in Borussia Dortmund’s stadium - not many people get that opportunity.

And as a Liverpool player, were you aware of an added importance to Europe?

We are synonymous with Europe. Probably as much as any club in Europe, I’d say. You look at the ratio of the European titles to our league titles is probably off the scale compared to some clubs. We’ve won nearly as many European Cups as FA Cups - seven FA Cups to six European, which tells its own story of how linked the club is with European football. I think we’re the only English club to dominate European football in the 70s and 80s, and it’s difficult to do that - only special teams do that - and we should be really proud of that. I’m just really proud that I managed to add to that in Europe with a UEFA Cup, a Champions League and a couple of Super Cups.

Even today, Liverpool’s tradition in Europe is still alive.

Yeah they’ve been to four [Champions League] finals in [15 years] - it’s incredible. Of course, the Anfield factor helps with European ties, but it is something special. We should be really proud of it. I know Liverpool are desperate for a league title, especially with the circumstances right now, but I always think that the European Cup is bigger than the league. It’s special, it elevates you to a level you couldn’t believe as a player, when you get your hands on that trophy. I think once Liverpool get their hands on that league title, it’ll be back to the European Cup.

Remember to tune in from 3pm to join the watchalong