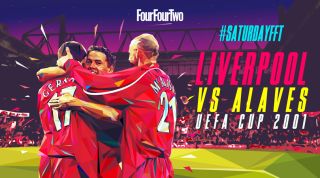 In short: Come back here at 3pm on Saturday, May 2 to watch the 2001 UEFA Cup Final between Liverpool and Alaves in full – and tweet along using #SaturdayFFT

Saturday, 3pm is an important cultural touchstone. We don’t need to explain it. You know immediately what it is, and what it means.

It doesn’t matter what your routine in the hours building up to 3 o’clock is: whether you drive, take the train, bus or walk, or stagger from the pub. The only thing that matters is where you are at 3pm, when that whistle goes. For hundreds of thousands of people in this country, every single Saturday, that moment is exactly the same.

For the next few weeks, and probably months, we’ve lost that.

Because of the COVID-19 coronavirus outbreak, football won’t be on, and we should be trying to stay inside as much as possible. It’ll hit a lot of people hard. Weekends will be much longer to fill, and that structured community aspect anchors a lot of our lives.

GET FOURFOURTWO DELIVERED TO YOU AT HOME AND GET A PAIR OF EARPHONES WORTH £49.99 FREE

We can’t replace that completely – but we can do our best.

On Saturday May 2, at 3pm (BST), FourFourTwo will be watching the Liverpool vs Alaves UEFA Cup Final from 2001 on YouTube – and we want to watch it with you.

We’ll be live tweeting it, using the hashtag #SaturdayFFT, and we’d love you to join in. Tweet along with us, take a photo of your home setup, video call your mates – let’s watch it together.

We’ve embedded the video below, and we'll begin watching dead on 3pm Saturday.

MISSED THE LAST ONE? We watched a Guardiola vs Mourinho Clasico

Why this particular final? Well, first of all, it’s got goals – nine of them.

But with Liverpool's other European finals – they've got to the last two of the Champions League four times since this game – this match often gets forgotten. And the truth is, it's amazing.

And it's worth remembering, this side is not quite Klopp's Liverpool. Prior to this season, they'd not lifted a domestic trophy since 1992, and a European one since 1984.

But they did have Michael Owen – in the middle of a Ballon d'Or winning year – Jamie Carragher, a young Steven Gerrard, and Gerard Houllier in the dugout. They'd also already clinched two trophies that season, and were looking for a third.

Want to get in the mood? Over the next 24 hours, we’ll be pushing out related features, quizzes and even a playlist to get you hyped up.

So get your friends involved, and let’s get our Saturdays back. We'll be hitting 'play' on the video below at 3pm precisely – and with the clock below, you've got no excuse not to sync.

NOTE: There's 20 minutes of build up on the video before the match starts – which we'll be watching and tweeting through – so kick-off will be around 3.20pm if you fancy putting the kettle on before it starts.