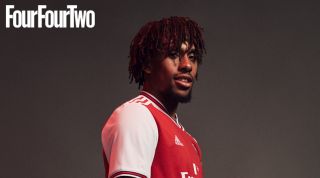 The Nigeria international, who joined Arsenal as a schoolboy, lauded the Spaniard and fellow academy graduate Jack Wilshere as his “biggest influences” during his time at the club.

Arteta, who is now a coach under Pep Guardiola at Manchester City, had previously been training with the Gunners' under-21s after injury and helped to guide the now-23-year-old Iwobi.

“I’ve always like to laugh and joke but back then I maybe took it a bit too far,” the Nigeria international told FFT in our August 2019 issue, out in shops now.

“Mikel told me to stay focused on football. Someone like him saying that makes you take notice, so I did.”

Iwobi also revealed that Jack Wilshere, who joined West Ham after an injury-hit decade with the Gunners, was someone he looked up to during his time in the academy ranks.

“Growing up, I idolised Jack Wilshere,” Iwobi told FFT. “He was a great technical player. Back in the day, we’d always try to get advice from him.”

The 23-year-old, who played 51 times for Unai Emery’s side last season - his most productive campaign yet - says his target for 2019/20 is “to win something.”

Read the full interview with Alex Iwobi in the August 2019 issue of FourFourTwo magazine, out now! It’s part of our 23 reasons why it’s still good to be a Gooner. Plus, we hail the stylistic genius of Andrea Pirlo, head to Monterrey for a mad Maxican derby, reflect on Jose at Chelsea 15 years on, recall a particularly damaging Panorama documentary and much, much more...